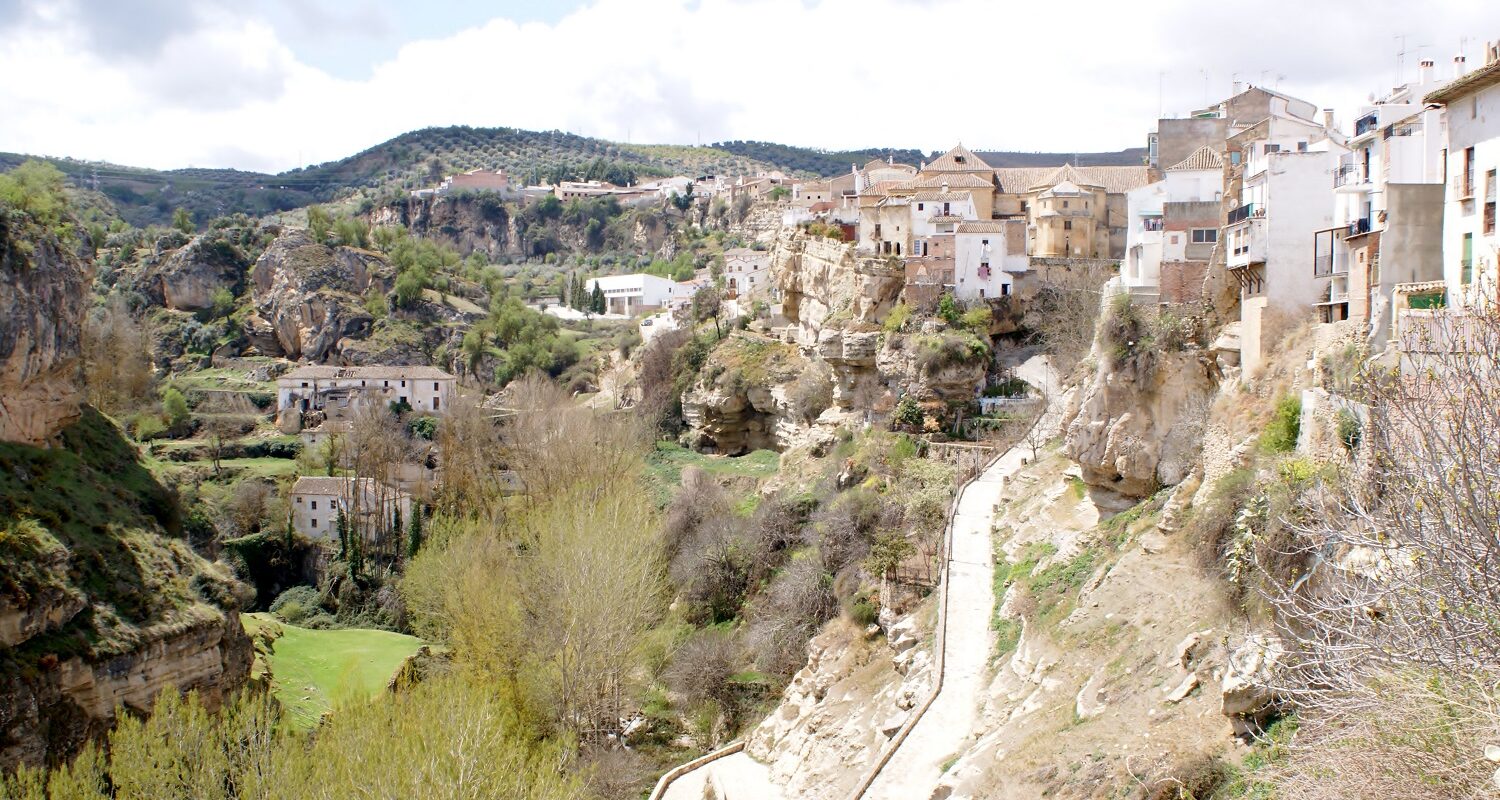 This stunning ride spans Malaga and Granada provinces, circling the Sierra del Almijara, Tejeda and Alhama, and taking in a host of different terrains, giving you an unforgettable experience of Andalucia’s beauty and diversity.

On leaving Velez-Malaga, take the A-7205 north running parallel to the A-356. The road gently undulates as you leave the town, giving you the chance to warm your legs and steel your resolve for the epic adventure ahead.

As you get out of the town, the landscape starts to green, tropical groves line the road, and you pedal over bridges through valleys with the occasional sleepy hamlet.

Before long, you reach a junction with a sign for the Ruta de Mudejar, which takes you on a tour of Axarquian Moorish pueblos. Ignore it for now, and carry on along the A7205 until you reach the village of La Viñuela. 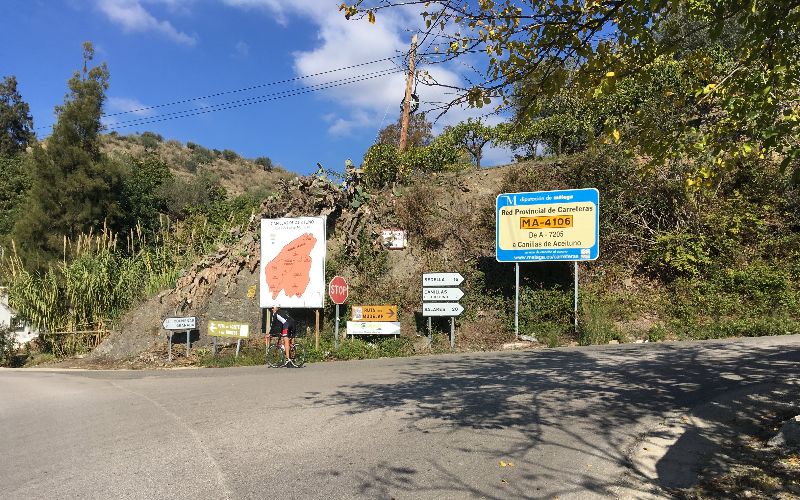 Also simply known as Viñuela, there’s a small crossroads before the village. Continue along the A7205, which gently rises, bypassing it, and you’ll reach a plateau at the top. From here, enjoy 4km of freewheeling as you ready yourself mentally for the first big climb ahead.

The road crosses the river at Puente de Don Manuel, then there’s a right turn onto the A402. This road starts out busier, but the traffic usually thins out as you go higher.

You’ll already have spotted Ventas de Zafarraya’s distinctive ‘Boquete’ (gap) on the horizon. A saddle-shaped dip in the rocks, this separates the Axarquia from Granada’s Alhama. Well known by the pros, this pass has been cycled by both the Vuelta a España and Vuelta a Andalucia over recent years. And you’ll understand its appeal once you start the 11km climb of 661m with an average grade of 5.9%.

The road gradually ascends, hugging the mountainside with the occasional sharp hairpin bend. In return for your efforts, you’re rewarded with incredible views of the Axarquia for miles around: jawdropping views of Maroma – the white pueblo of Alcaucin clinging to its side – and the surrounding Almijara.

There’s a popular restaurant halfway up the pass – no doubt thanks to the stunning views. I’m guessing you’ll be keen to do the ascent in one go. But it’s worth noting in case you’re in need of liquids on the way up. 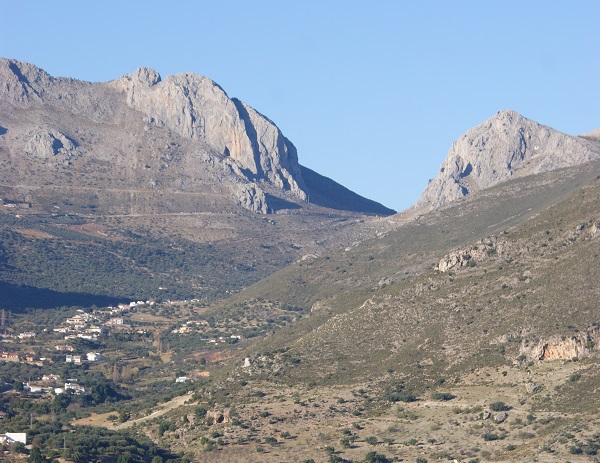 After cycling triumphantly through the centre of the Boquete, you’ll reach the small but well-known village of Ventas de Zafarraya. This marks the start of El Llano (plain) de Zafarraya, and as the name suggests, the road levels out as you reach the village.

The A402 forks right in the village centre. Follow the road round and soon you are pedalling across a large plateau surrounded by mountains: the Sierra de Loja to one side, Almijara to the other. The altitude, climate and geology of this region make it perfect for agriculture. As a result, there’s a large patchwork of fields producing fruit and vegetables, which are known for their quality across the province.

Interestingly, the town is also known for its historic remains, with Neanderthal bones found in the Boquete de Zafarraya’s caves dating back 34,000 years.

How is that even possible?

Anyway, sweeping through this plateau, there’s approximately nine kilometres to catch your breath, cool off and admire ornate fields of artichokes. Then you’ve got another three kilometres of 150m of curvaceous climbing before you swoosh down the hill towards the town of Alhama de Granada. 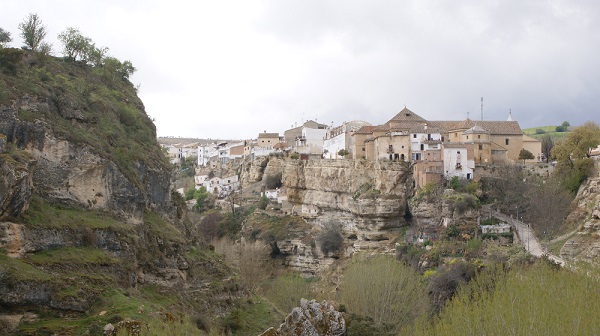 Alhama de Granada’s name comes from the Arabic ‘al-hammah’ or thermal baths. And thanks to its location between Malaga and Granada, it had strategic importance to the Moors. Add its uninterrupted views of the snow-capped Sierra Nevada, and you can understand why this good-looking town has been a much sought (and fought) after location over the ages.

As you reach the town, there’s a roundabout where the A402 does an unexpected turn, almost back on itself. Take this first (sharp) right on the roundabout. And at the end of this road, the third exit on the roundabout (it’s the second ‘legal’ exit – the other is a one-way). Then there’s the option to stop for refreshment or food at one of the eateries along the road. Or carry on down the hill: your call.

As you roll down the hill out of town, you’ll see a left turn for the thermal baths (balneario). Stop just after, before crossing the Rio de Alhama, and you may also catch a glimpse of the deep ochre gorges nestling beneath the town. A well-trodden tourist attraction in the area, these are well worth a day’s exploration by foot.

Instead of continuing along the A402, take the right fork onto the A338 after crossing the river. Then pedal up a short hill studded with olive trees, which takes you to the head of the next valley. At the top of here, take the right turn towards Bermejales (A338) for a whizzing descent towards the reservoir.

Again, the landscape changes: rolling hills are neatly cornrowed with olive groves, and Granada and the Sierra Nevada are ranged across the horizon.

There’s a short stretch on a cobbled road (not great on road bike!), which cuts across Bermejales reservoir. Stop here and enjoy stunning views across its aquamarine waters, framed by the Almijara. This serendipitous spot comes to life during the summer months with locals and tourists wanting to swim, kayak or picnic on its shaded banks.

Take the first right towards the campsite for a brief stretch through a wooded area on a poorly surfaced road (G4032). And, not long after passing the campsite, this road meets the GR3307, which becomes the GR3302 over the next few kilometres before you reach the small village of Jayena.

Now gird your loins for the last big climb: 444m over 10.25km. Mostly steady, the ascent has one large switchback. And when you reach the top, you’ve not only conquered all of the ride’s biggest climbs, you’ve reached the mid-point.

Now turn right on the A4050 and enjoy ten kilometres of flat, steady cycling through a leafy green, wooded section. When you see the Meson Los Prados restaurant to your right, you’ll know you’re near the big descent.

More than 34 kilometres of exhilarating, adrenalin-pumping descent down the Rio Verde’s ‘Ruta de Cabra’. With the road almost circling the mountains in places, you switch from dramatic views of the Sierra Nevada and Alpujarras, to the Guajares, to the Almijara.

Check your speed: near that top, the road has the occasional rockfall and is uneven at times. The switchbacks can also be severe in places, with the road blithely barrier-free.

You’ll likely whizz past cyclists attempting the climb. Perhaps inspiring you to come back and do it yourself. Do it; you won’t regret it.

Bombing through the villages of Otivar and then Jete, the road evens out at the bottom of the valley. And soon you are cycling along roads lined with avocado and mango groves – a common sight along the Costa Tropical.

At the end of the Rio Verde, you’ll reach the bustling town of Almuñecar. You’ll see a roundabout before an underpass just before entering the town. Go left just before the underpass to avoid ‘death by roundabout’ in Almuñecar’s imaginative traffic system.

After a short stretch along this road, there’s a sharp right at a large junction with traffic lights. This gets you onto the N340 – the coastal road, which takes you back to Velez-Malaga.

There’s a short flat section looking out over the Rio Verde before the road climbs out of the town, compensating with gorgeous views across its rocky bay and beyond.

Two tunnels later, you emerge in La Herradura – a tranquil horseshoe-shaped bay. And as you cycle this stretch, the road starts to green, pine trees lining the sides. After the next ‘Cerro Gordo’ tunnel, you’re cycling through honey coloured cliffs on a wonderfully quiet stretch of the N340 – in the Maro-Cerro Gordo Natural Park.

The next twenty kilometres to Nerja is stunning. The expansive Mediterranean sparkles to your left, lined with some of the finest beaches and snorkelling on the Costa. To your right, the cliffs rise dramatically – reflecting the sky’s colours as the day progresses.

The road undulates with the occasional short climb – nothing major. And once you’ve reached the small village of Maro just before Nerja, there’s a long descent through Nerja before 15km of flat road riding to the Velez-Malaga turn off in Caleta de Velez.

I suspect you’ll be keen to get back after such an epic ride. But if you fancy stopping along the way, there are plenty of roadside cafes and chiringuitos in Nerja, Torrox, El Morche and Caleta de Velez. Alternatively, you can get back to base in Velez-Malaga, shower, and go out on the town.

If you’ve got anything left in the tank!

Where to stay? If you decide to have a cycling break and do all five routes, accommodation choices in the Axarquia region are varied, check out our pick of hotels, holiday rentals and B&Bs.