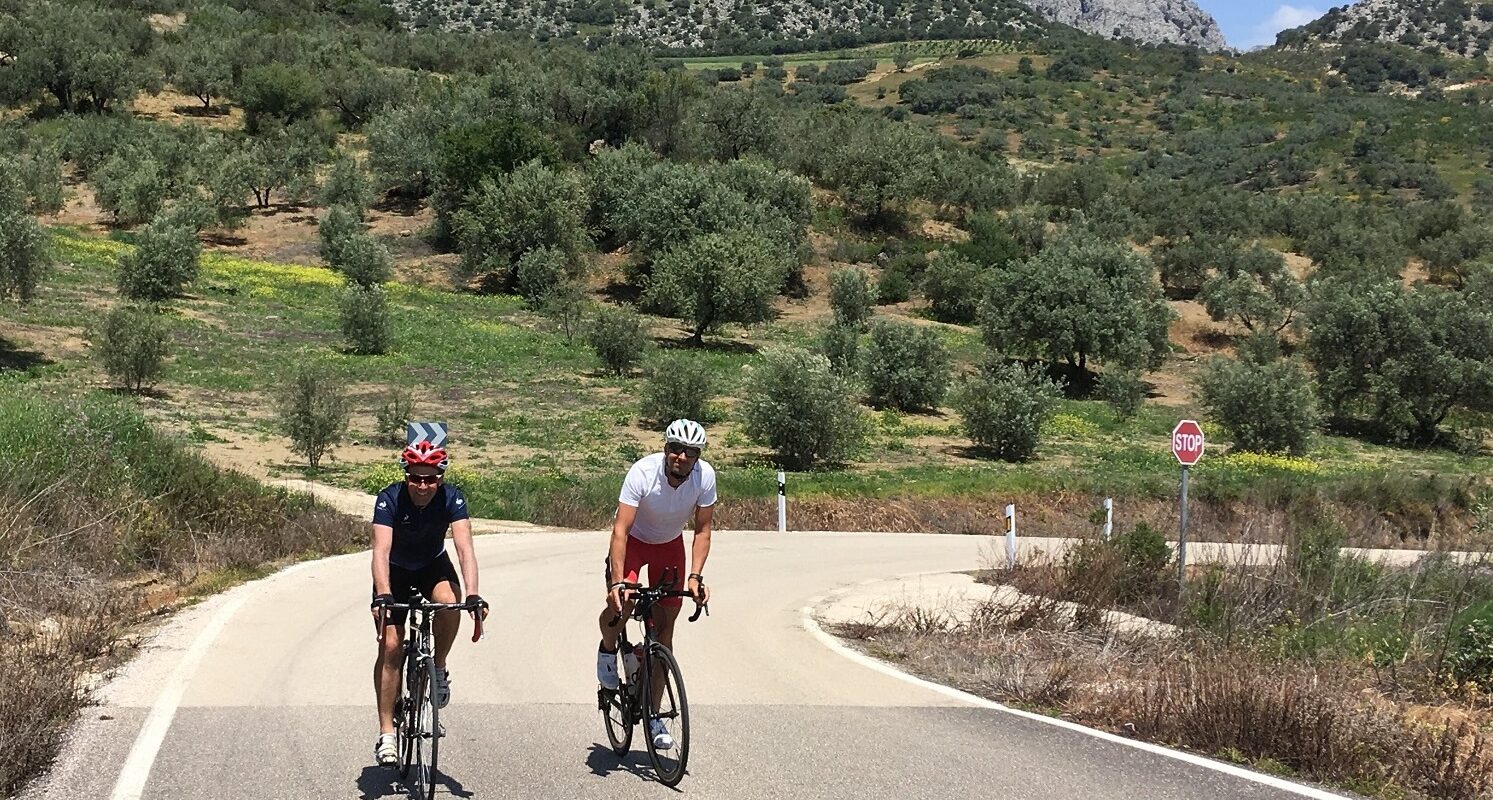 Circling Lake Viñuela, this ride climbs to the hillside village of Periana before levelling out, rewarding you with incredible views of the lake, mountains and olive groves.

If you’re feeling strong, you can add an extra 20km and 500m climb with the Alfarnate ‘kick’. Alternatively, enjoy the fruits of your labour on a deliciously undulating return to Velez-Malaga.

La Viñuela, Periana and Riogordo are all villages on the local Ruta del Aceite (Route of Oil). You’ll see why with the surrounding hillsides studded with olive groves. You may even be able to buy oil for your bottle cage. I suggest keeping it free for more thirst-quenching liquids though: you’re likely to need them! 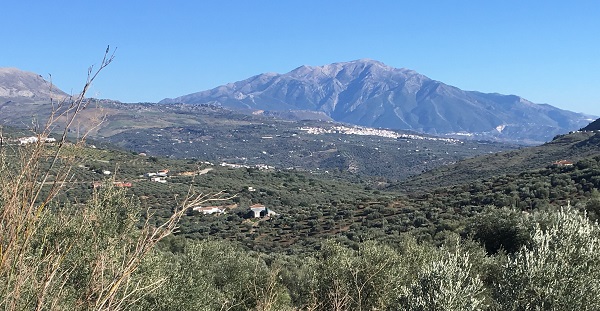 Leaving Velez-Malaga, get onto the A7205 north – a gentle rolling road, running alongside the busier A356. This means it’s reasonably quiet, although there’s the occasional glimpse of the main road.

Soon the countryside softens and you’re pedalling over bridges through valleys of avocado groves and trees laden with papaya.

You’ll reach a right signposted the Ruta de Mudejar. We’re not doing that today. But keep it on your radar: it’s amazing. And check it out here.

There’s the occasional climb – nothing severe – just warming up your legs for the Periana ascent. And you’ll float easily through the pretty hamlets of Los Ramirez and Los Martines before reaching La Viñuela. 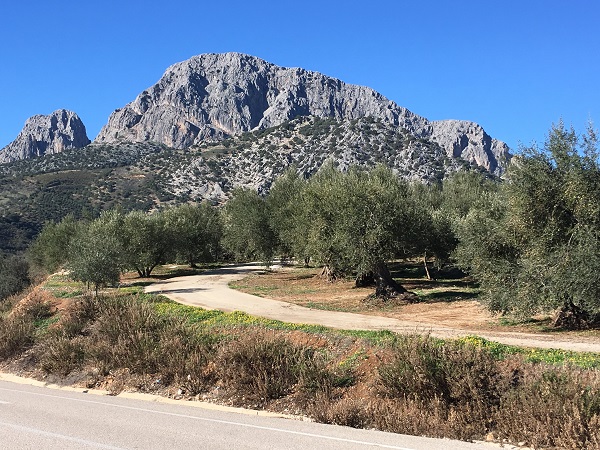 Viñuela is a municipality in Malaga province so the village is called La Viñuela. You can go straight ahead through the village, which has plenty of eateries, a cashpoint and a grocery store. Or you can bypass it on the gentler A7205. Either way, if you climb through the village, you’ll reach the main road.

The road flattens and winds, and before long you’re in open country. There’s a signpost for Ventas de Zafarraya – a stunning ascent in the Epic Almijaras Loop. But you’ll be turning off the road before long. Another time.

There’s around 4km of freewheeling before you reach Puente de Don Manuel. And after crossing the river, you’ve got a short stretch on the A402. Then take a left at the traffic lights, getting back onto the A7205.

On leaving Puente de Don Manuel, get ready to climb the 323m to Periana over the next 6.5km. As your legs and heart get pumped, the scenery springs into action. Fields and plains stretch for miles around – they were sprinkled with yellow flowers the day we rode – and the mountains gradually emerge on the horizon.

At first, the Boquete de Zafarraya: a dramatic crest of rocks, separating the Axarquia from Granada’s ‘Alhama’. The Ventas de Zafarraya ascent cuts dramatically through its centre. 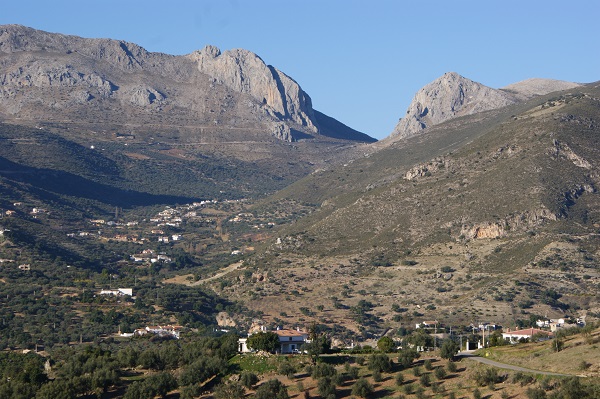 Later, as you wind up towards an underpass, cast a glance over your shoulder for an eyeful of the mighty Maroma with Alcaucin’s white village clinging to its flanks.

Once you’re through the underpass, the ascent starts to kick. The road has loose hairpins with a few savage corners, and if you’re riding in the midday sun or summer, you’ll revel in the occasional shade of an olive tree.

As you get higher on the hillside, Lake Viñuela comes into view – its mercurial blue depths snaking off into the distance. 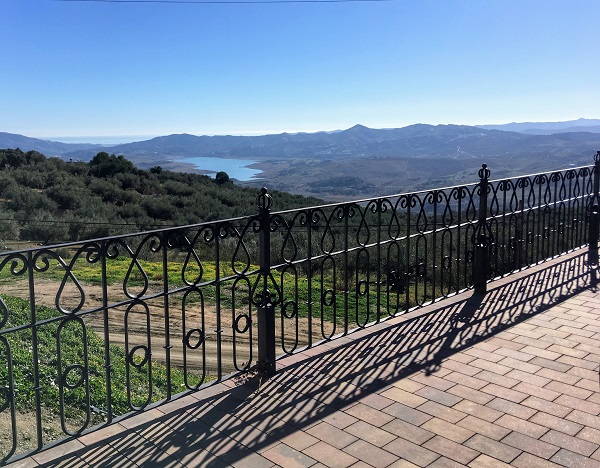 It’s hard to tell where Periana is – it’s hiding over the crest of a hill shortly after what looks like a large metal barn. Importantly, there’s a water fountain by the bus stop shortly after the barn. Perfect timing.

Take a left into Periana at the roundabout and fuel up or have a celebratory beverage at one of the many eateries. If you like a warm welcome and good, no frills, food, try Bar Caribe. We were rewarded with a delicious (and enormous) sandwich of succulent pork – straight off the spit. But if meat isn’t your thing, their tropical salad with local avocados and cheese will hit the spot. 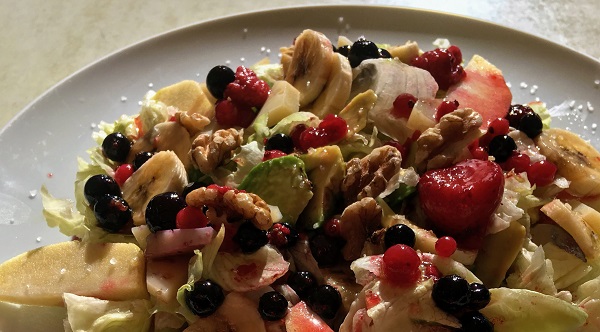 Now you’ve reached the highest point in the ride, enjoy the spectacular views and rolling road. As you glide around the hillside, you’ll see dramatic rocky cliffs above, olive groves stretching for miles around, and the Malaga Mountains, ‘Indian’s Head’ of Antequera, and Almijaras ranged across the skyline. Awesome.

If you want to go higher and have (a lot) more in your legs, you can supercharge your ride by taking the right onto the MA156 shortly after Periana. Not for the faint hearted, the first 8km on this Alfarnate road climbs a further 496m, reaching a maximum elevation of 1,071m. 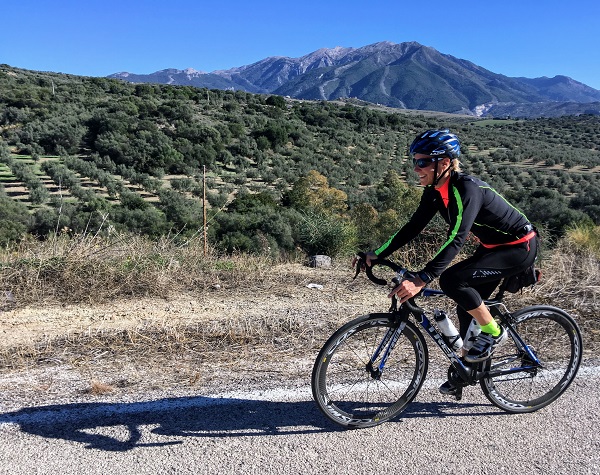 From here, it’s downhill, taking a left onto the MA4102 (Alfarnatejo) after Alfarnate. And when you reach the end of this road, go right onto the A7204.

Now everyone’s back together. Let’s crack on.

There’s a gentle climb to the top of the valley with a perfect spot for taking photos next to the ‘bus-stop’ at the summit. Then there’s a short swoosh down the hill, bringing you to the A356 intersection.

After going beneath the underpass, you’ll see a road directly ahead signposted for the Ruta del Aceite. Take this and enjoy a mellow 1.5km along the valley to Riogordo. 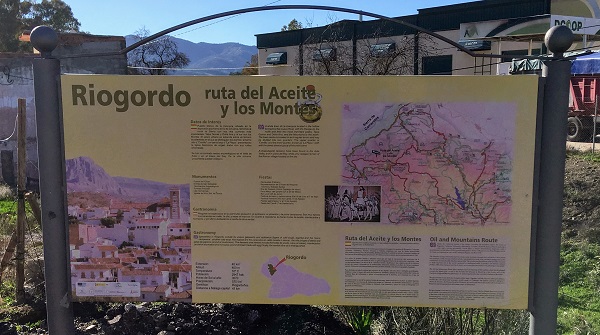 Nestling among the hills, Riogordo is small village with (unsurprisingly) a river running through it. Thinking the name meant big river (‘gordo’ is fat in Spanish), which would be strange given the region’s lack of water, I discovered instead, that the Rio de la Cueva’s water is ‘fat’ with minerals. Yep. Exactly that.

They also have a ‘Dia del Caracol’ (Day of the Snail) on June 1st when they cook up 350 kilos of snails and dish them out.

You won’t see much of the village – there’s a sharp left onto the MA3107 once you get into the town: if you cross the bridge, you’ve gone too far. But if you want to fill up, there are plenty of food options: a café bar at the turn-off; a bakery to the left after the river; and plenty more options in the village beyond.

If you’re carrying onto the MA3107, you’ll start climbing almost immediately. It’s short and sharp. So before long, you’re out of the village with lovely views of the countryside. We did the ride after a particularly wet winter and the surrounding fields were soft and green, the roadside lined with poppies, orchids, dandelions and a riot of spring flowers.

From here, the 17km of road to Benamargosa is sweeping and smooth with the occasional short, sharp climb: sheer bliss. Wending its way through the hills, it’s an average of -1.7%, so you can power down the pedals and savour the cooling breeze. Admire the alpine views and neatly planted olive groves, and on reaching the municipality of Comares, you’ll see its white crested Moorish village peering down – begging for a visit. 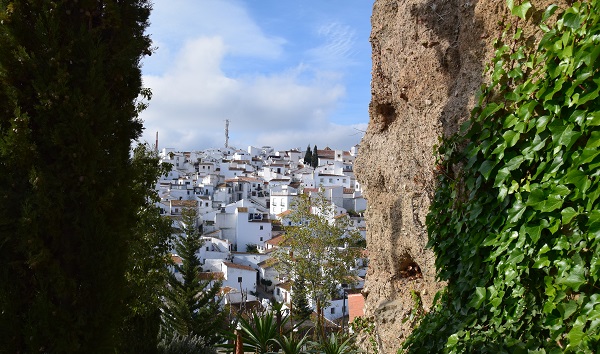 Pedalling through the villages of Los Hijanos, Los Gallegos, La Molina, La Zubia and Salto del Negro – blink and you’ll miss them – there are two right turns with rides to Comares. Another stunning ride goes up there. Check it out here and get it in the diary for another time. 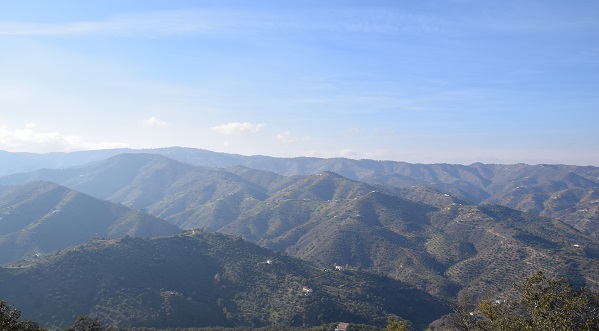 The last time we rode this route, a farmer had brought his horse to one of the cafes in Benamargosa. As you do.

It’s that kind of village.

At the main junction, there are several cafes and bars where the locals (and their horses) hang out. There’s also a small supermarket and cash point. On reaching here, go straight on.

Soon the road turns into the MA3113 and continues along the Rio Benamargosa, passing Axarquia Airport before reaching the A356.

Take a right onto the A356 and then carefully take the left towards Trapiche shortly afterwards. Then it’s a right onto the A7205 bringing you back to the road into Velez-Malaga. Back in time for a bebida and a tapa.

Where to Stay: For places to stay in Velez-Malaga we have a hand-picked selection of self-catering accommodation and hotels. To check out other cycling routes see here.