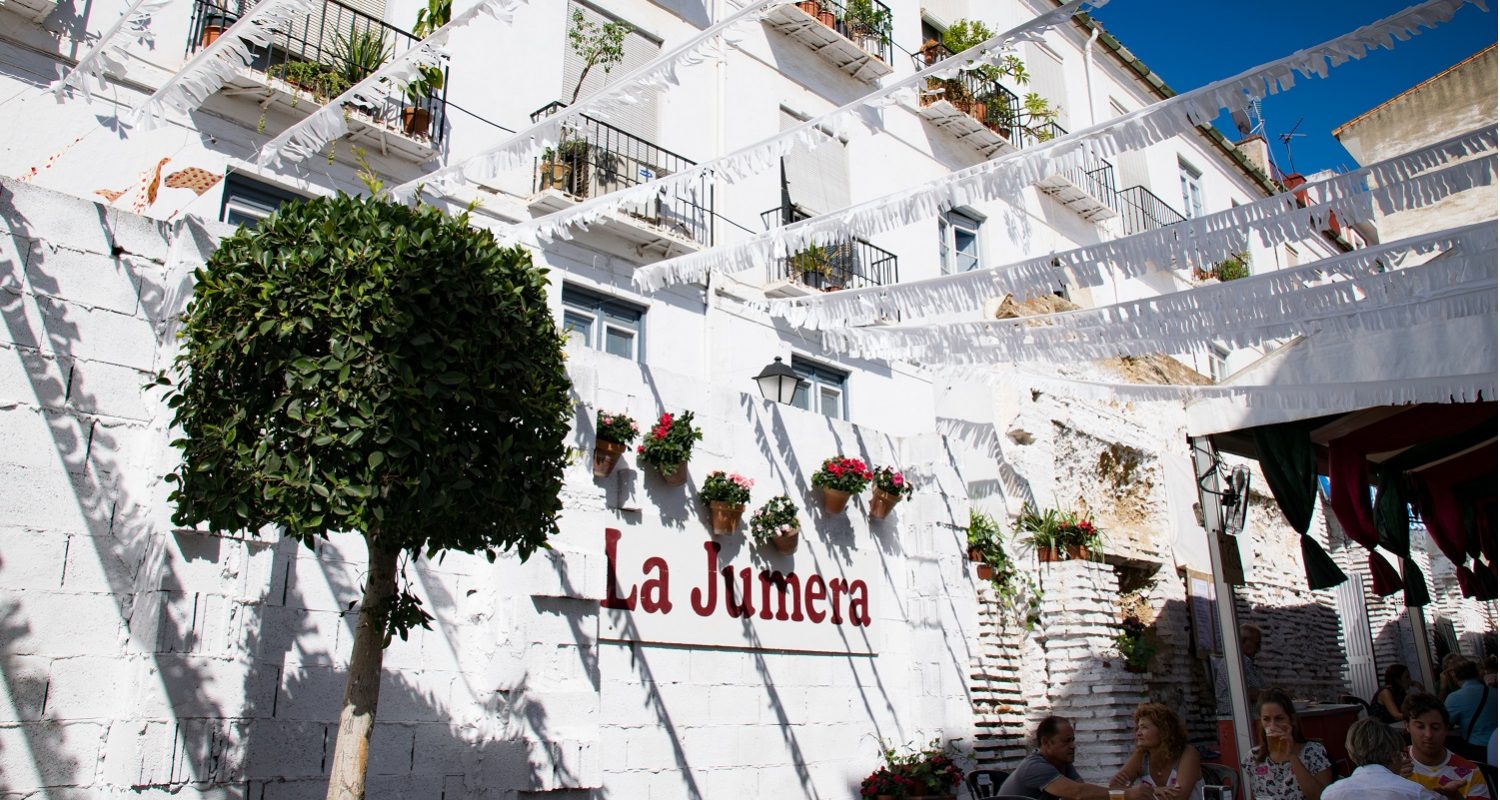 Andalucians take their ferias seriously, and Velez-Malaga is no different. It’s celebrated around the weekend of Saint Michael’s day – which falls on 29th September – and stretches for four or five days with various celebrations held all over town.

Good to know: Friday the 30th September is a holiday in Velez-Malaga. 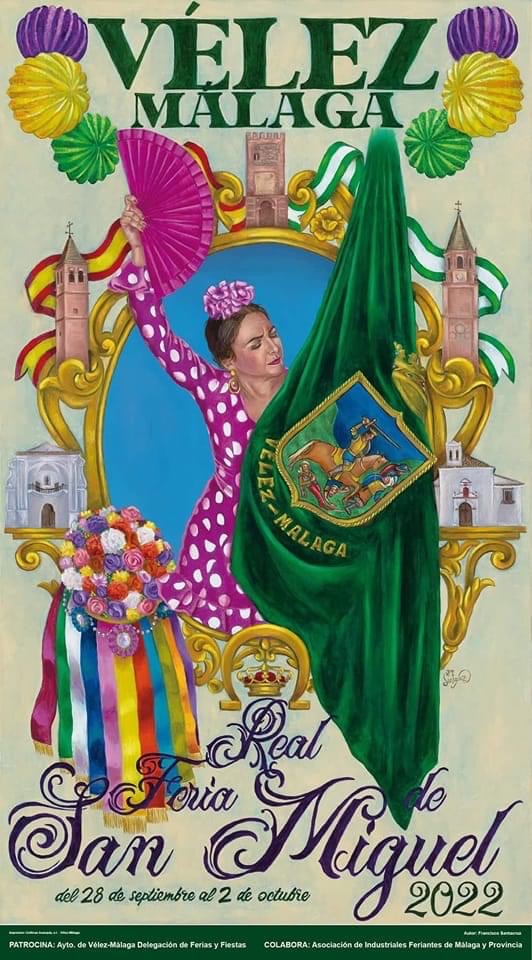 Although San Miguel is not the patron saint of Velez-Malaga, it’s still one of the most important festivals held in town, only bettered by Semana Santa (Easter week).

The feria begins (27th at 20.45hrs) with an opening speech given by a popular Veleño, a music concert and fireworks all held in Plaza de Las Carmelitas. The feria is split into day and night, with the day’s festivities held in the historic centre. Then in the evenings, it’s moved down to Recinto Ferial Velez-Malaga, see Google map below (it’s just north of El Ingenio Shopping Centre) 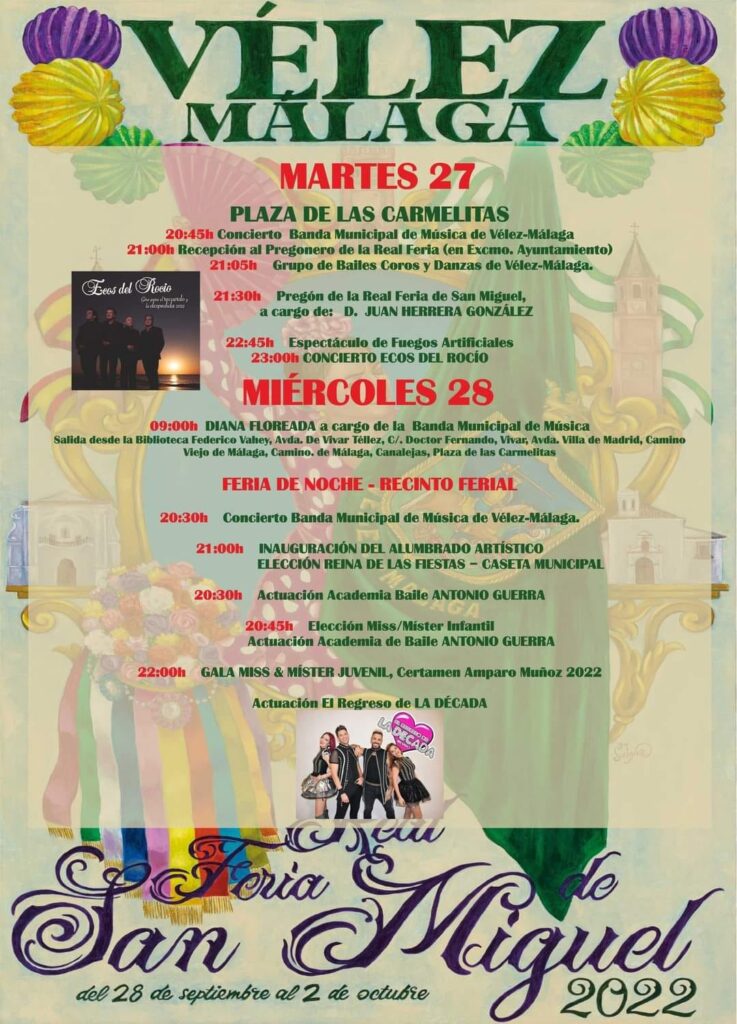 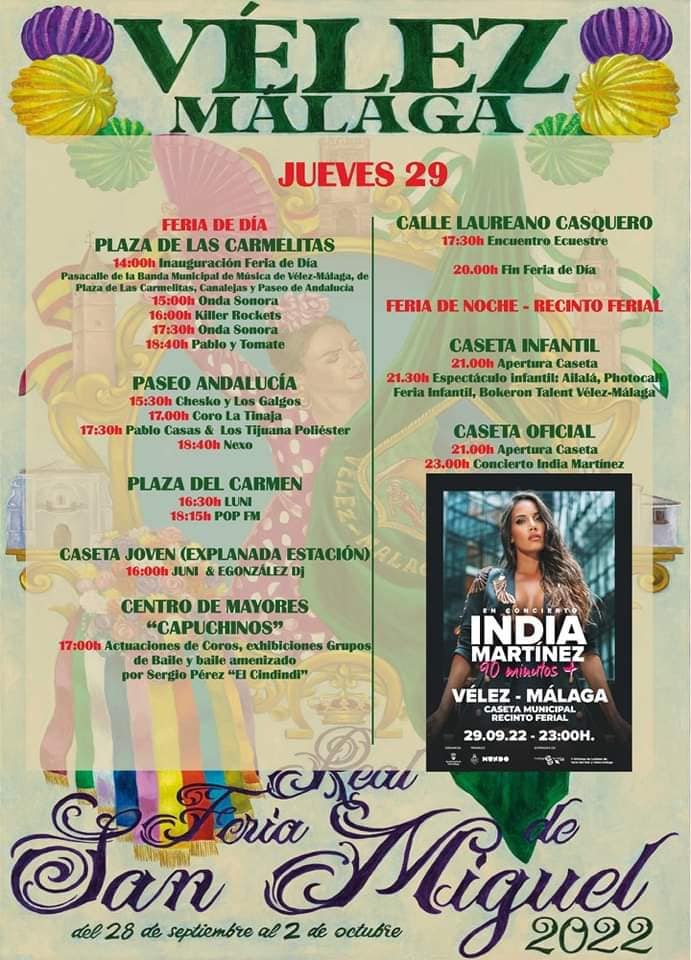 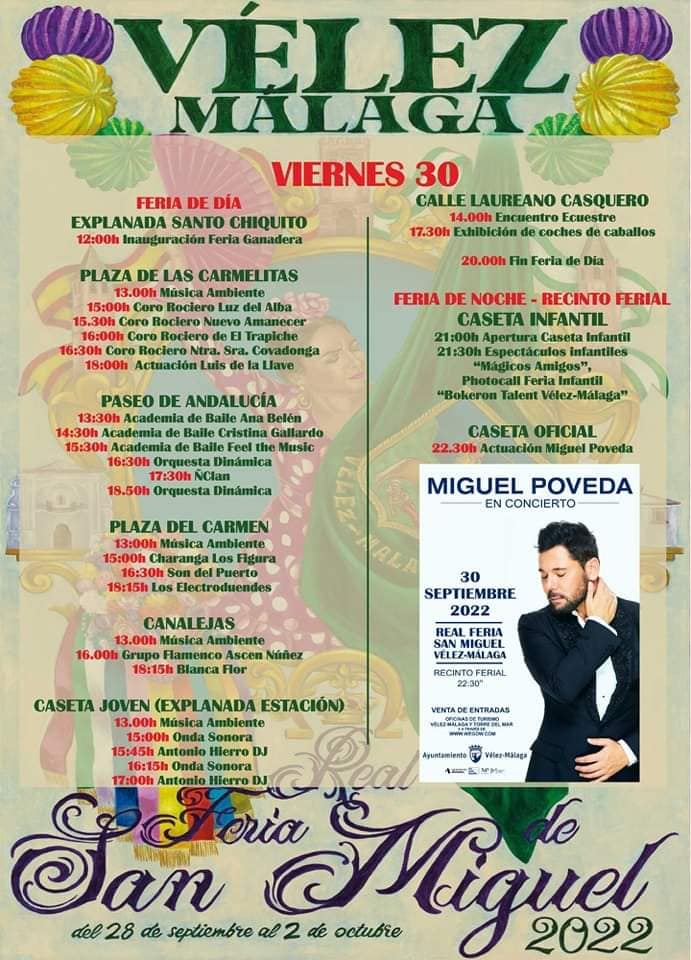 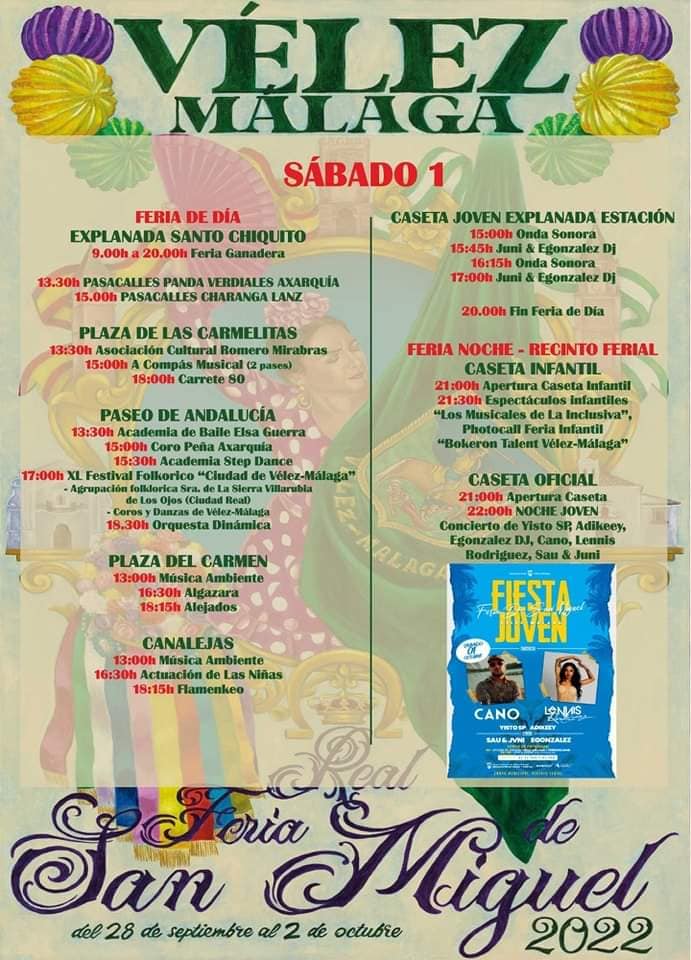 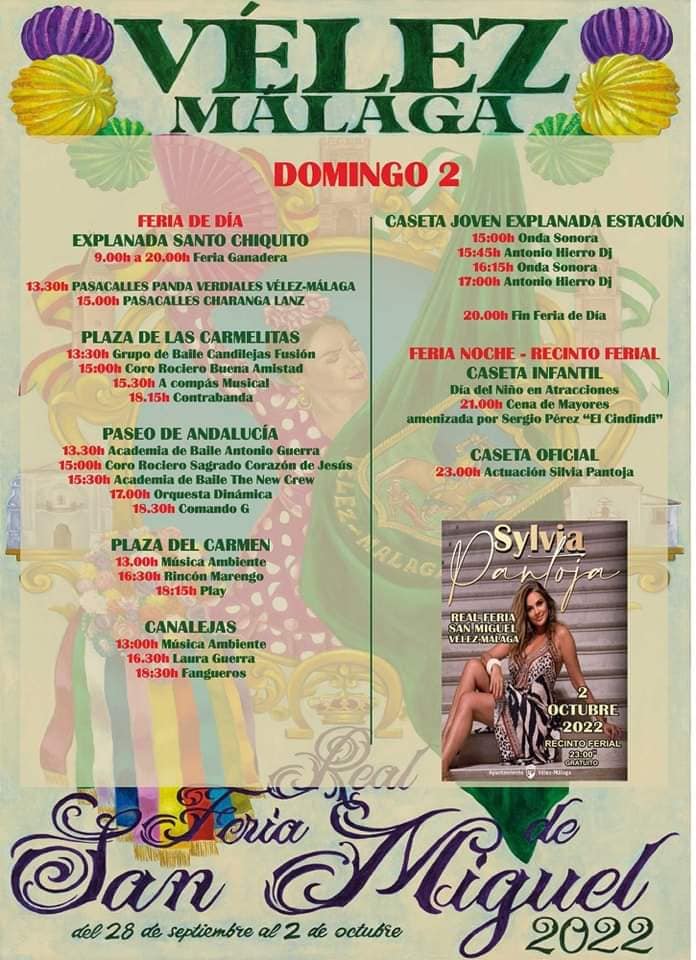 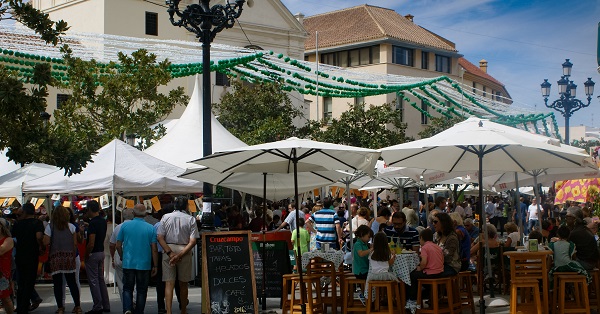 What to Expect from the Daytime Feria 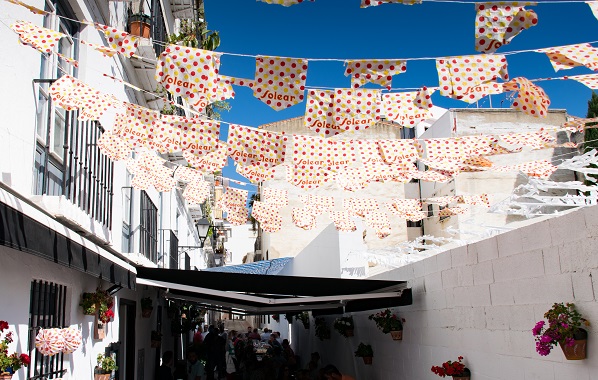 Velez buzzes with atmosphere during feria. The streets are flooded with people and temporary bars are set up to make sure everyone is fed and watered. Live music and dancers perform in the various casetas (tents) around town. There are also stages usually set up in Plaza del Carmen and Plaza de las Carmelitas. Daytime feria begins at around 13.30hrs and finishes at 20.00hrs.  Don’t miss the fireworks at Plaza de Las Carmelitas on the first night on 27th September and daytime feria gets started on Thursday afternoon which is traditionally when everyone heads out with their work colleagues. There are so many casetas all over town, two of our favourties for live bands, DJs and general fun are Gloria Bendita (Calle Albero) and Jumera (opposite Teatro Carmen).

As well as the larger plazas, restaurants and bars open their doors, check out Pianista del Carmen on Plaza del Carmen which has a terrace to the rear and Sala Eiffel with it’s rooftop terrace.

Parking: The best place to park for feria is all around the edge of Maria Zambrano Park or next to the bus station. Plaza de las Carmelitas is a 10 minute walk away.

Here are the main tent acts who are playing live at Velez-Malaga’s 2022 feria: 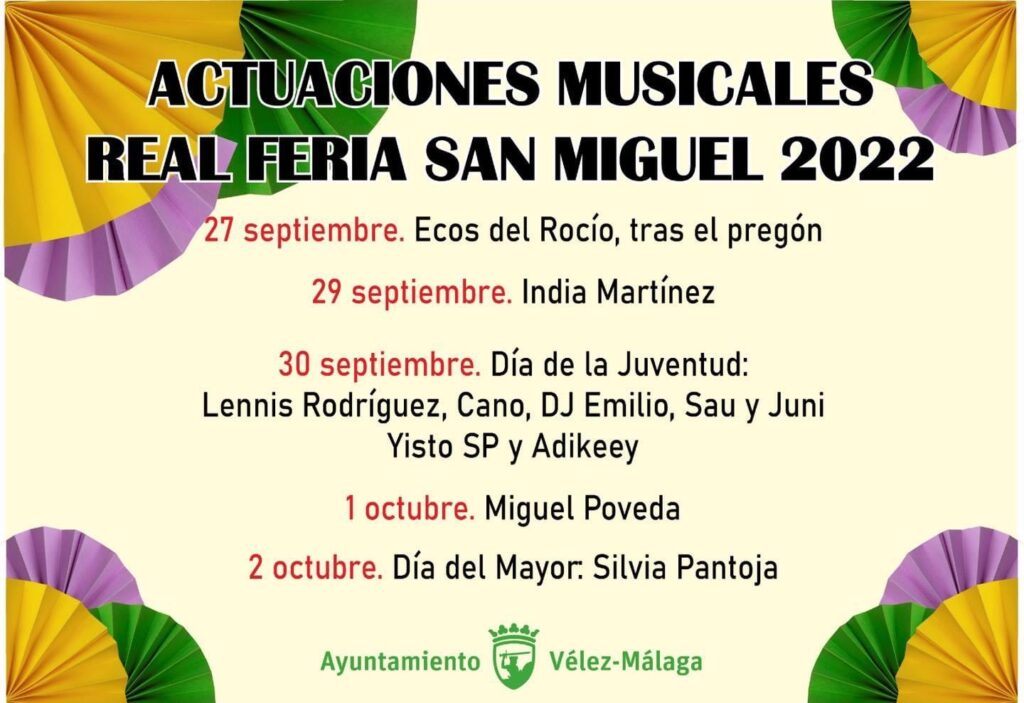 From 16.00-19.30hrs there are DJs on in the youth tent at the Mercado Mayorista (at the bottom of Paseo de Andalucia, next to the bus station).

What Goes On at the Nighttime Feria

The nighttime entertainment continues from around 20.00hrs at Recinto Ferial Velez-Malaga just north of the shopping centre, El Ingenio, in between Velez-Malaga and Torre del Mar. Here is a Google Map. Free buses are often laid on to shuttle visitors between the two (More info to follow if it’s released).

Nighttime feria is good fun, drawing in a young crowd with lots of bright lights and big rides, quite different to the daytime festivities.

The large dusty car park undergoes a transformation in the weeks leading up to feria with a series of huge tents and fairground rides going up to accommodate all ages.

There’s children’s theatre, dance, music and the King and Queen of feria are also announced to large crowds on Wednesday at the evening’s festivities. You’ll need tickets for the more popular events – such as concerts held in the main tent (see poster above) – which can be obtained at the tourism office in the town hall on Plaza de Las Carmelitas or online here.

Top tip: Often the first or last night is Noche de Ninos from 20.30hrs with reduced fares for the rides.

To get tickets (it’s all free entry) go to the tourism office of Velez (Plaza de las Carmelitas) or Torre del Mar.

Alongside the flamenco dresses, drinking, dancing and general frivolity there’s also a livestock fair held in a field on Calle Ctra. de Loja (next to the cemetery), a short walk from the Paseo de Andalucia. Expect to see goats, sheep, horses and mules as well as some activities for children. It starts at midday on 30th September.

In past years from 11.30 on Saturday and 16.00hrs on Sunday horses are invited to the Recinto Ferial (nighttime feria ground in the carpark near El Ingenio). It’s a lovely opportunity to see Andalucian horses looking their best with their owners as well as a free callos (tripe) for all spectators on the Sunday. Try not to miss from around 17.00hrs on Sunday.

A Short History of Feria 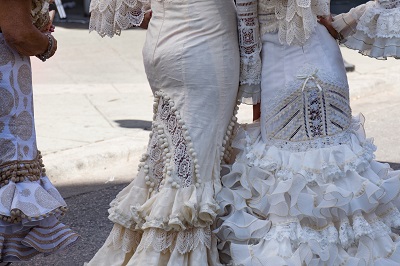 The roots of the festival in Velez could be traced to a religious holiday celebrating the friars of the Convent of Santiago in late summer. It also coincides with the end of harvest, and in an area where so much depends on farming it’s no surprise that the celebration is so important.

The oldest records held marking the feria date back to 1894 and consist of religious functions, bullfights, fireworks and distributing bread out to the poor. The feria allowed traders to drum up extra business and went on long into the night, bringing the neighbouring communities of Velez-Malaga together to celebrate.

Nowadays the feria still has religious roots, and many of the event’s stalls and bars are set up by the Brotherhoods of Velez-Malaga. All money raised by these stalls is ploughed back into the community one way or the other, whether into maintenance, charity work or as a fund for the Semana Santa celebrations.