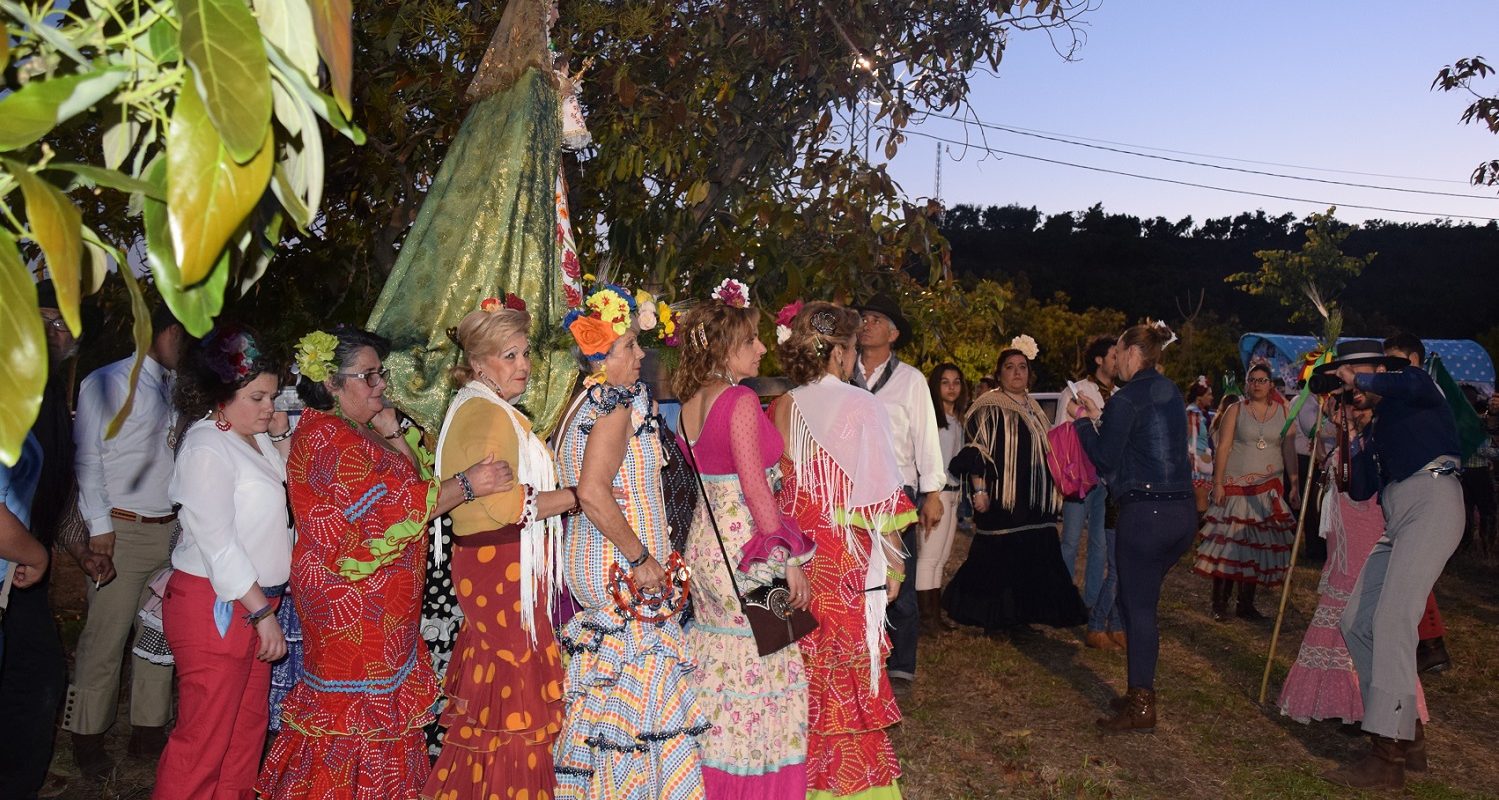 This is one of our favourite festivals, for us it optimises Andalucia. So what is a Romeria? These are pilgrimages which takes place in various towns each May – the most famous being El Rocio in Huelva which is said to be the oldest and largest festival in Andalucia. Put very simply it’s a big party from start to finish. People walk from a town to a designated point in the country where there’s food, singing and dancing. Velez-Malaga’s is on 14th and 15th May 2022 and it is in honour of the town’s patron saint, the Virgin of los Remedios. She has been the patron saint since the early 1700s after numerous miracles were attributed to her image, you can see her usually in the Iglesia Ermita de Nuestra Señora de los Remedios.

The image of the Virgin is a replica made by José Navas-Parejo after the original, brought to Velez from Granada in 1592, was destroyed during the Civil War. 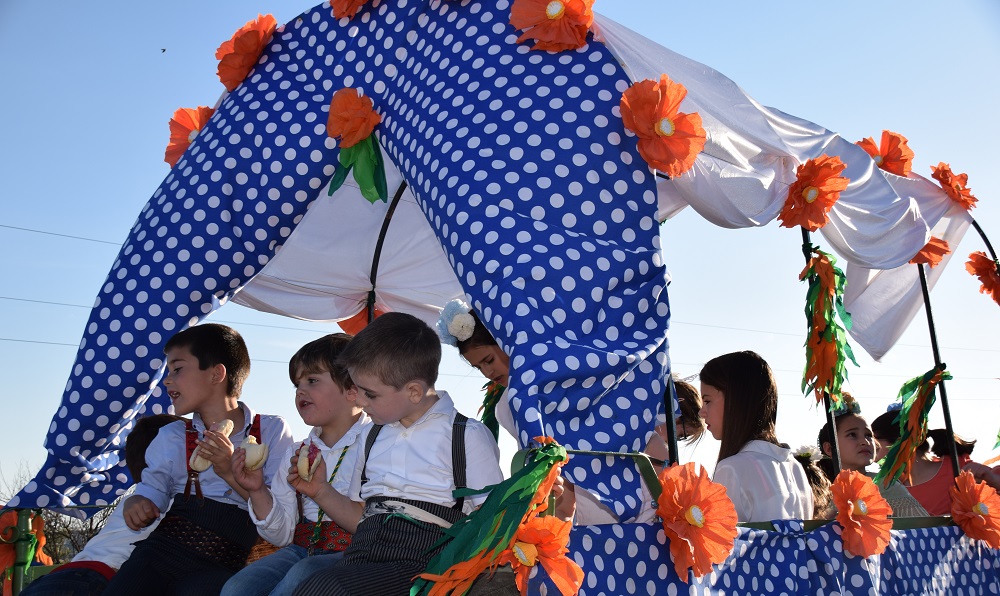 What to Expect from the Romeria

The Romeria has been taking place for around 40 years. Originally started by devoted locals, it is now professionally organised. While many people wear traditional dress (traje gitana), there’s no dress code, as such, for the festivities. Family members and groups of friends get together and plan the Romeria together. From the carriage to food and music, every detail is thought of. Usually every member pays a contribution to the party this ensures there is plenty of food, drink and even a tent when they reach the countryside. There are however some who walk the route to the countryside without being in an organised group and there is a public bar in the country. If you want to join in, keep in mind it’s a long day spent outside walking through both the town and the countryside, there is only one bar (which sells food) in the countryside but it’s a good idea to take warm clothes and food. 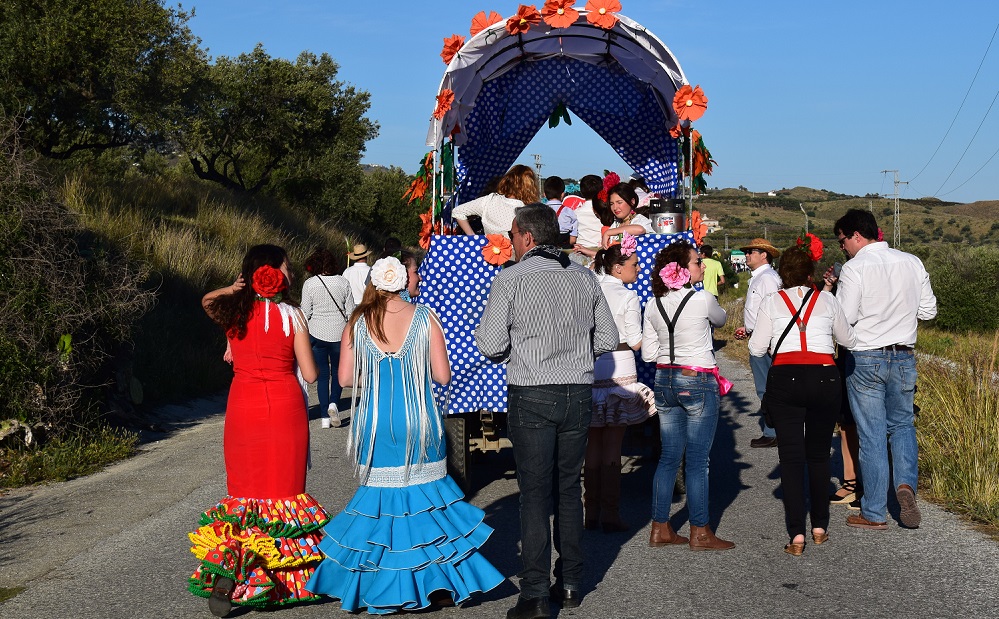 The two days of the Romeria begin on the Saturday afternoon with the opening speech and act of proclamation at the Iglesia Ermita de Nuestra Señora de los Remedios. Choirs and dance groups often meet and serenade those taking part creating a memorable spectacle at the Cerro in Velez. After the ceremony the walking starts, with people winding through the streets of Velez heading to the Finca La Pola where the festival is held. The procession is made up of people on foot, in carts or on horses with much singing and dancing keeping everyone entertained. The typical drink en route is rebujito (sherry and lemonade). 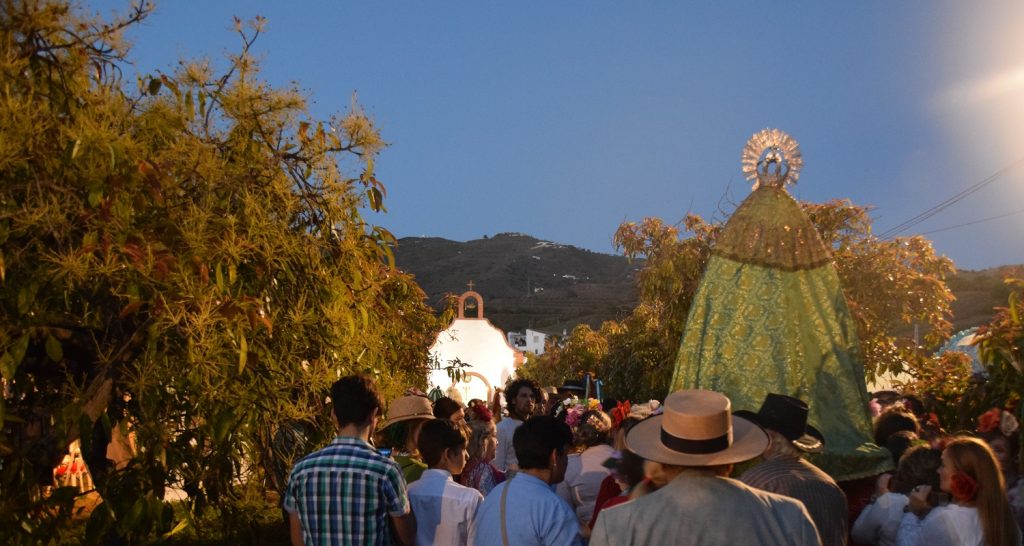 Saturday evening culminates with a song for the Virgin, a short mass (at around midnight) and dancing in the countryside. Some people spend the night here camping out and soaking up the atmosphere. Sunday is centred around a day of singing, eating, drinking, dancing, and of course everyone pays homage to the Virgin of los Remedios who makes her way back to Velez. 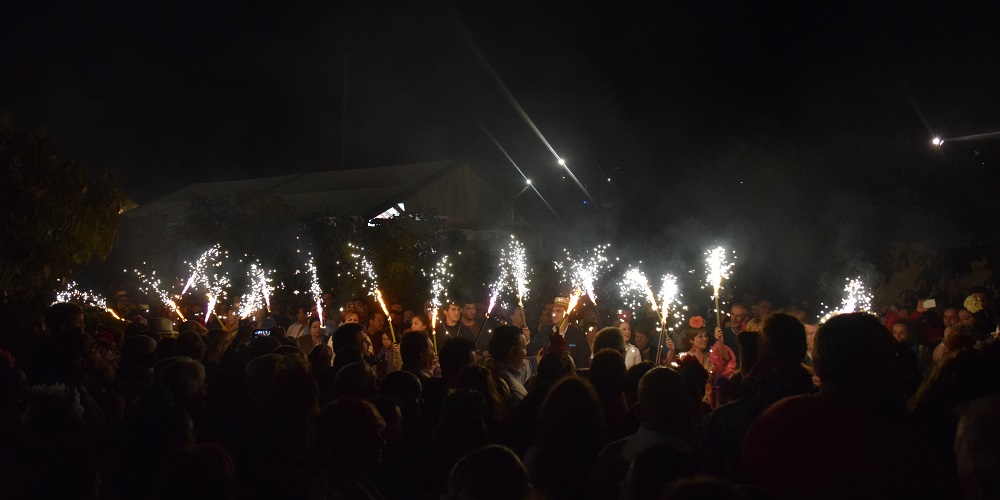 At 16.00hrs approximately the Romeria begins at The Iglesia Ermita de Nuestra Señora de los Remedios at the Cerro. The virgin travels down to Plaza de las Carmelitas at 17.00hrs. Most of the horses and carriages join the walk at Calle del Rio at around 17.30hrs so this is another good place to watch the participants.

From about 20.00hrs onward there is a public bar which also sells food at the site where the party is held (Finca La Pola) and plenty of organised parking. See below for 2022 itinerary… 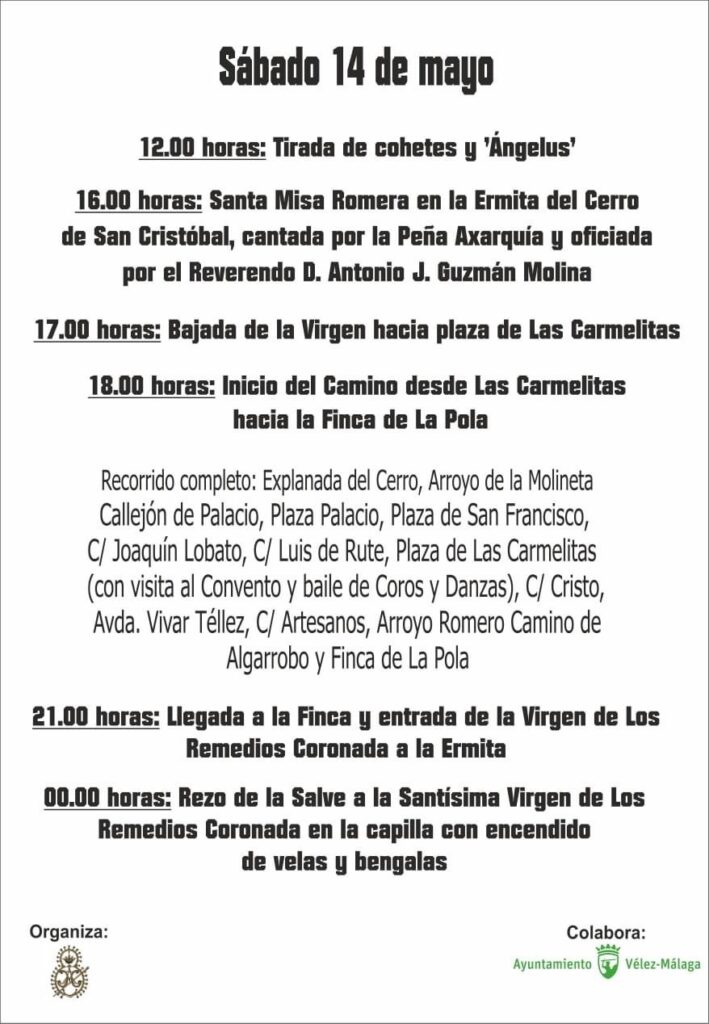 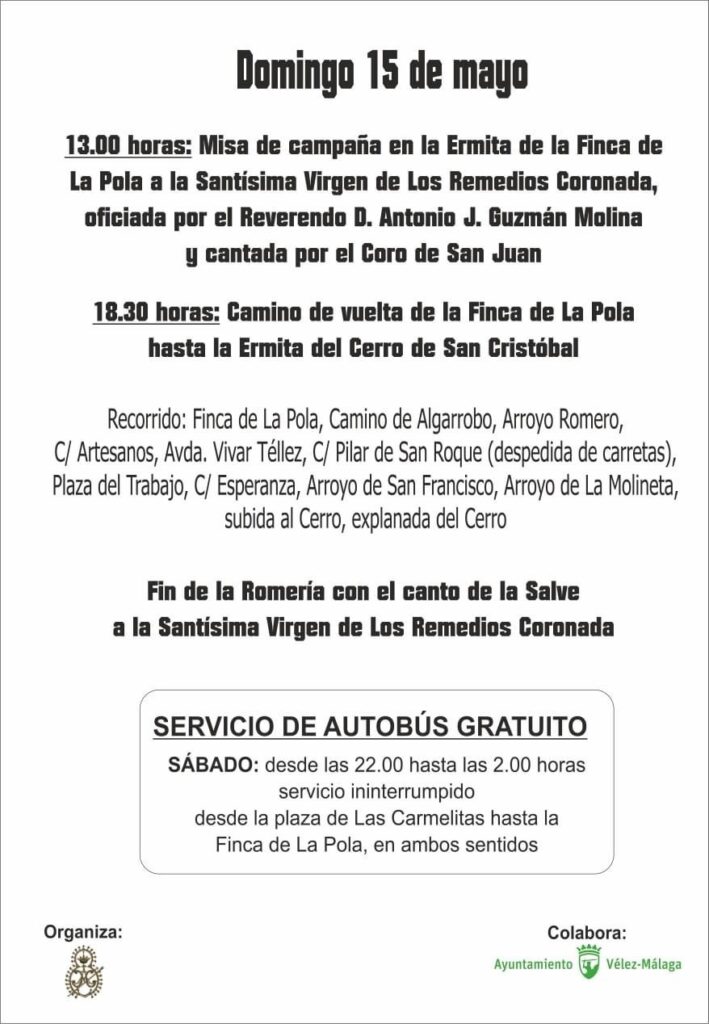 The month of May is a busy time in the area as most surrounding villages hold their own pilgrimages over the month. We have listed the most popular below and where they were celebrated in 2019. Look out for exact dates on our What’s on during May post.

The Pilgrimage of the Sacred Heart of Jesus of Almayate

The Pilgrimage of the Virgin Immaculate Conception of Cabrillas

Vino de Malaga or raisin wine my friends back home