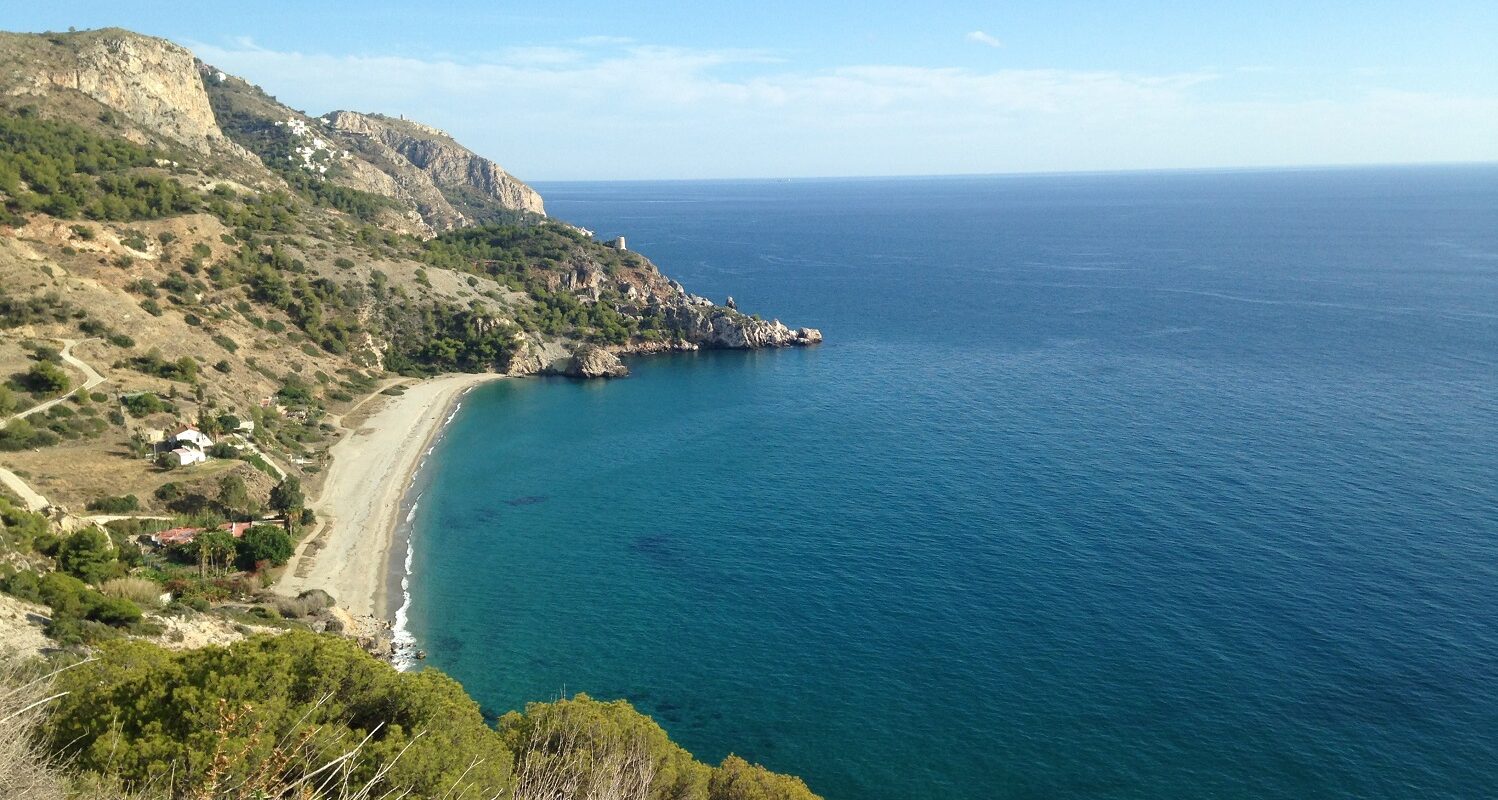 If there’s one ride I recommend in the Axarquia, it’s this. It’s the reason I fell in love with the region for cycling.

It’s easy to follow as a ‘there and back’ ride. It’s a great warm-up for the legs before you attempt any climbing in the mountains. There are plenty of interesting towns and villages where you can stop off, fuel up and explore. And the views are spectacular:  the majestic Almijara mountains on one side, the Mediterranean’s shimmering expanse on the other.

Pedalling along the N-340 coastal road, you’ll pass through the towns and villages of Caleta de Velez, El Morche, Torrox, Nerja and Maro. Thereafter, the road quietens as you reach the breathtaking natural park between Maro and La Cerro Gordo.

Following the rugged coastline from here to Cerro Gordo’s ‘mirador’, you’re rewarded with incredible views: Malaga Mountains to the west, La Herradura and perhaps a peak of the Sierra Nevada to the east. 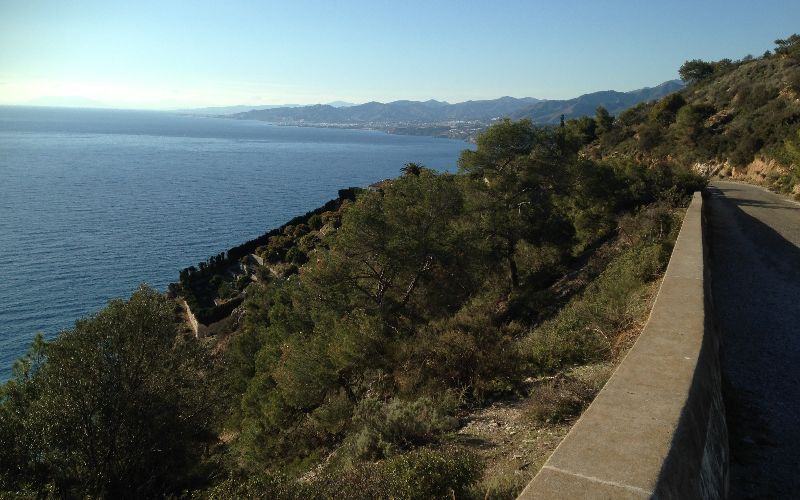 There’s an N-340a between Velez-Malaga and Torre del Mar, running parallel to the busy A356 and bypassing El Ingenio shopping centre. You can take this if more convenient, but a quieter, more scenic route is the Camino de Torrox, which starts near Urbanisation El Limonar and runs south-east towards Caleta de Velez.

Caleta is ‘bay’ in Spanish, so this is essentially Velez-Malaga ‘on-sea’. And thanks to its location near the Alboran Sea (the fertile passage of water between the Atlantic and the Med), Caleta de Velez is also the surrounding area’s main fishing harbour and market. So if you like fish, check out the restaurants along the paseo maritimo (Chinchín Puerto and El Camarote are two favourites on the port itself). Or pick some up from the market. On the way back.

When you reach the main road, go left and enjoy approximately 17km of flat and fast road. Punctuated by the occasional set of traffic lights, this passes through the sometimes sleepy – sometimes tourist-heavy – villages of Mezquitilla, El Morche and Torrox Costa.

Along the way, you’ll catch the occasional glimpse of sweeping beaches dotted with umbrellas and chiringuitos (beach-side restaurants). These are mostly hidden behind the holiday homes and apartment blocks to your right. But they’re easy to reach if you take a right turning and head towards the sea.

Once through Torrox, the road widens, the beach opens out, and you can see Nerja and the rocky coastline in the distance. From here, you’ll wind around the coastline for another six or seven kilometres, cycling past several small bays, before reaching the westernmost edge of Nerja.

Before heading into the town, take a moment to stop at the roundabout to admire the Almijaras mountains spanning the skyline, El Cielo standing proud at the far right.

Done? Now make your way into the town. 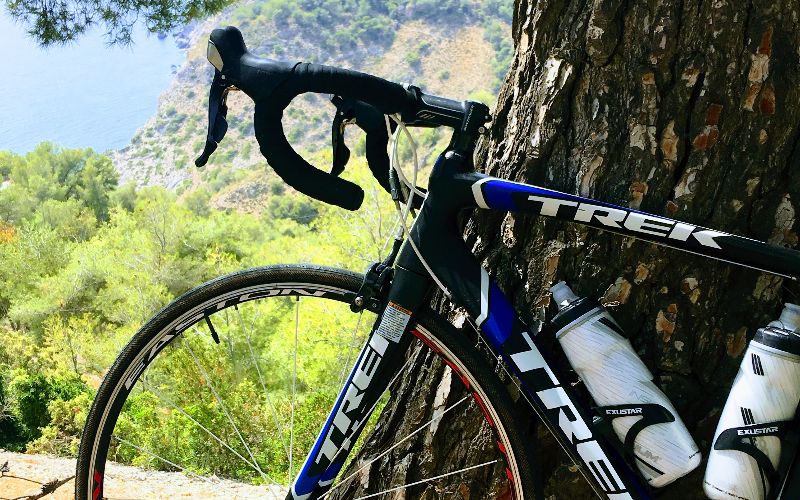 Nerja is an old fishing town, which has transformed into a well-known destination for tourists the world over. Despite this popularity, it’s managed to keep most of its charm. And, thanks to a string of smaller beaches – rather than one long soulless stretch – it feels more serendipitous than other seaside towns along the coast.

The Balcon de Europa is well worth a detour: a cliff-top stretch of promenade looking out over the surrounding coastline and Mediterranean. There are signposts on the N340, but the promenade is pedestrianised. So be aware that you may have to wheel your bike – or go super-careful – depending on how busy it is.

There’s also a decent bike shop along the N340 – on the left just after Iranzo supermarket. Useful if you need inner tubes, cycling provisions, or a quick tune-up.

Since arriving in Nerja, you’ll have noticed that the gradient has increased. It’s barely discernible. But it’s there. And you’ll continue to climb – slowly but surely – until Maro village.

Maro is the local agricultural district – a large fertile area of land covered in neat lines of crops, tropical fruit groves and masses of plastic sheeting, which isn’t so pretty.

You’ll know you’re close to Maro village when you see Nerja’s 19th century aquaduct – Puente del Aguila (Bridge of the Eagle). To the left as you cross a bridge, this impressive piece of architecture straddles a rocky gorge with the Almijaras in the background. Built to transport water to the local sugar factory, its well worth a stop and a photo, but easier on your return.

Soon you’ll reach a roundabout with Maro (right) and Nerja Caves (left). The caves are in Maro and are one of Nerja’s top attractions. Found in 1959, they stretch for five kilometres, housing prehistoric cave paintings and the world’s largest stalagmite at 32 metres! 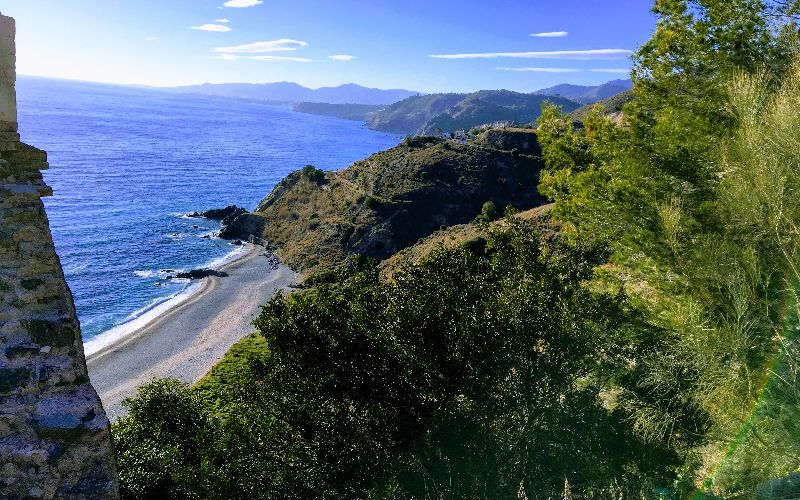 Fancy a pitstop? Take the Maro turn-off and the first right onto the ‘ring-road’ for a scenic village tour with a few well-located cafés and restaurants.

Legs still strong? Go straight ahead, staying on the N340 for a kilometre to reach the Acantilados (Cliffs) de Maro-Cerro Gordo and the Natural Park and protected marine area.

The road becomes much quieter now the A-7 is more convenient for cars going between towns. As a result, this stretch of road is dominated by:

And hurtling down the next hill, you’ll get a peek of the natural park in all its glory. Sturdy towers – built to ward off pirates from days of yore – stand defiant on rocky peninsulas. Dramatic cliffs frame the road: by day a golden honey, absorbing the sunset’s vibrant pinks as the day wears on.

The coastline cradles a series of quiet picturesque beaches – many only accessible by path or tourist bus, giving them extra cache. And thanks to it being a marine protected area, the Med’s aquamarine waters are teeming with sea life. If you’re lucky, you may spot a dolphin.

After seven kilometres of incredible cycling, you’ll cross a bridge into Granada. And from here, it’s another kilometre before you take a right (Cerro Gordo) – just before a tunnel. Now you have a delightful winding ascent on an uneven and, at times, perilously barrier-free road towards the topmost ‘mirador’.

There’s a restaurant at the top (Restaurante Mirador de Cerro Gordo, Carretera Vieja Almería Málaga, 18697 La Herradura), which has erratic opening hours. If it’s open, it’s well worth having a drink or on their terrace, which has spectacular views out to Malaga.

After feasting on the view from the lookout, there’s the option to drop down into La Herradura on the N340 and fill your belly in one of the laid-back chiringuitos along the seafront. Or you can avoid the post-lunch climb and head back: your call. 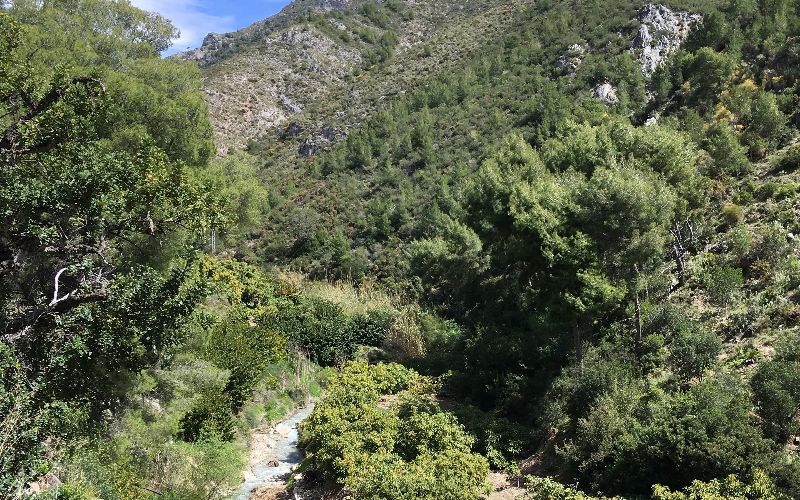 To get back from the mirador, head towards Malaga indicated by the road sign at the top of Cerro Gordo. It’s counter-intuitive (and not so scenic) but avoids any illegal left turns on the N340.  The Guardia Civil can be vigilant on this junction, and they love a good ‘on the spot fine’.

After descending down this bumpy winding road with views across La Herradura and beyond, take a right onto the N340 to go through the tunnel you missed before. Lights are advisable here, though the lighting is sufficient for cars to spot you.

Now you can head back the way you came. Just a few extra points of interest: – 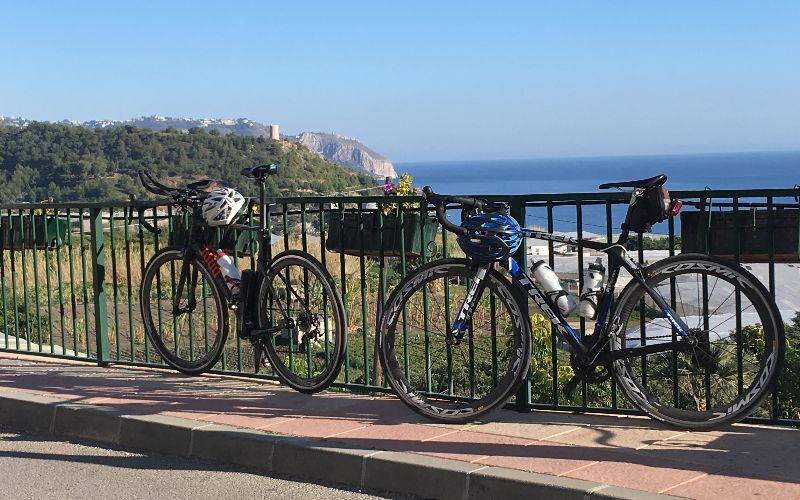 Note from the Writer…

The N-340 is one of Spain’s main highways, running some 1000 kilometres along the Mediterranean coast: from Barcelona to Cadiz. In places, it’s built up and busy (think Marbella to Estepona – eurgh). But along some stretches, it’s tranquil and scenic – even in high season.

Researching this article, I was amazed to discover that the stretch between Malaga and Almeria was the scene of a Spanish Civil War massacre in 1937. With Malaga under siege: by land, sea and air; between 5,000 and 15,000 civilians fled the city to head north to Almeria. While on the coastal road, it is approximated that between 3,000 and 5,000 of these – including the elderly, sick and children – were killed by Nationalist air force and navy. Those who stayed in Malaga were rounded up, killed and put into mass graves. Every year on 7th February wreaths are laid in Torre del Mar to honor the victims.

When you see this road today, ferrying holidaymakers to tourist hotspots, it’s sobering to imagine the horrors witnessed less than a century ago.

Where to Stay: Thinking of visiting the Axarquia for a cycling break? Check out our other routes here and pick of the best hotels in Velez-Malaga.

About the Author: I’m Sal – cycling nerd & lover of road bikes, mountain bikes, city bikes, the works. I got into cycling to avoid commuting on the overcrowded Tube. It was (and still is) the best way to get around London. Our rekindled love affair inspired a move to the green ‘Cycle City’ of Bristol to take up road and mountain biking. And now, I take my shiny steeds far and wide, so I can explore as many mountains, coastlines and cities as I possibly can.