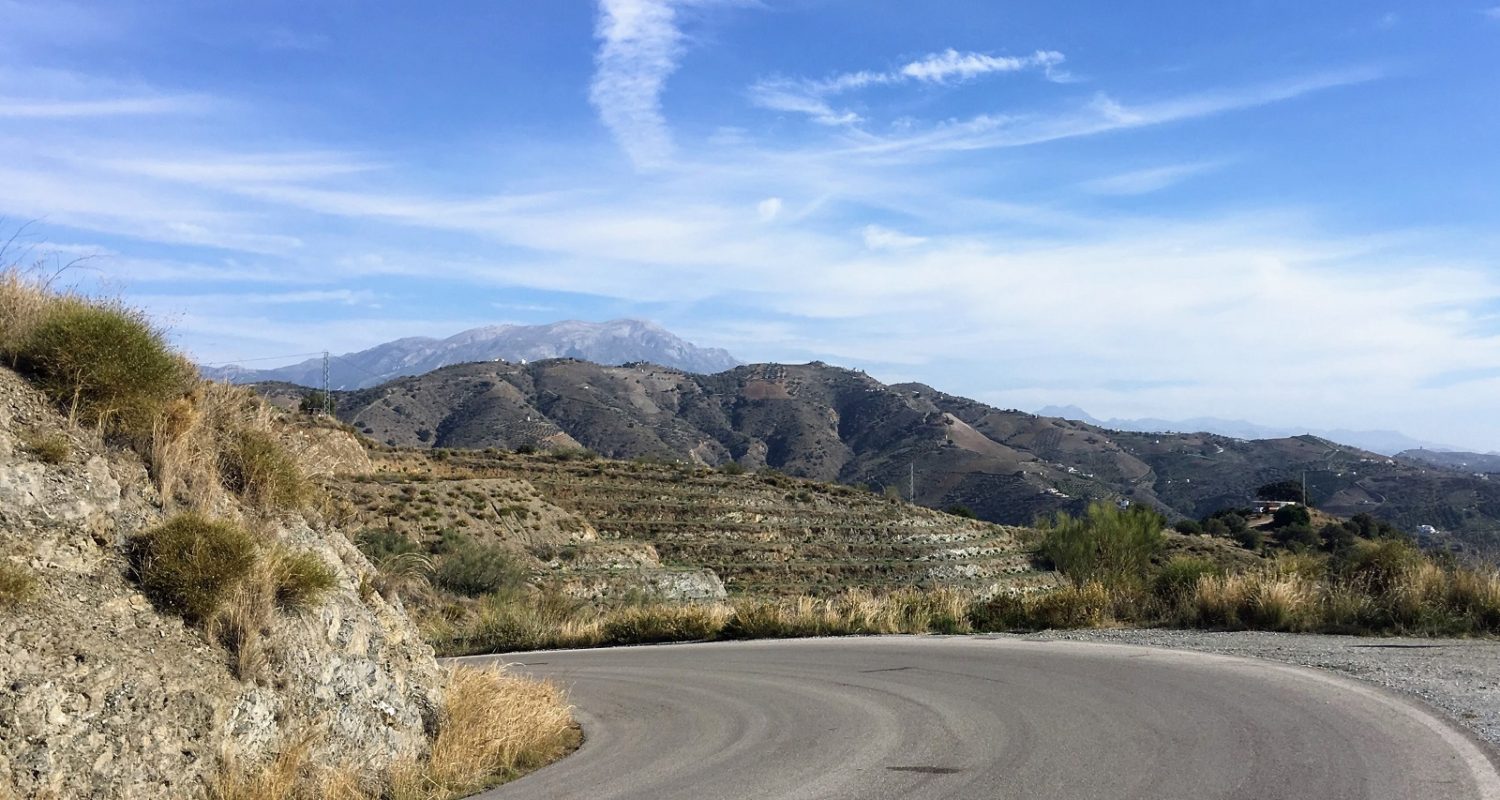 One of Andalucia’s highest white villages, Comares, sits atop Table Mountain like the foam on the crest of a wave. Head and shoulders above the surrounding countryside, you can see it from Velez-Malaga and for miles around.

If you’re a cyclist conquistador like me, you’ll no doubt want to get up there: to see the spectacular views; to challenge yourself on what Strava calls a Category 2 climb; and ‘maybe’ to win a few bragging rights.

So here’s a fantastic ride that will get you there, including a few additional bonuses: a smooth, quiet road on a plateau that feels like it’s on top of the world, and a spell cycling along the Mediterranean with plenty of pit-stop ops in beachfront chiringuitos (beach-side restaurants). 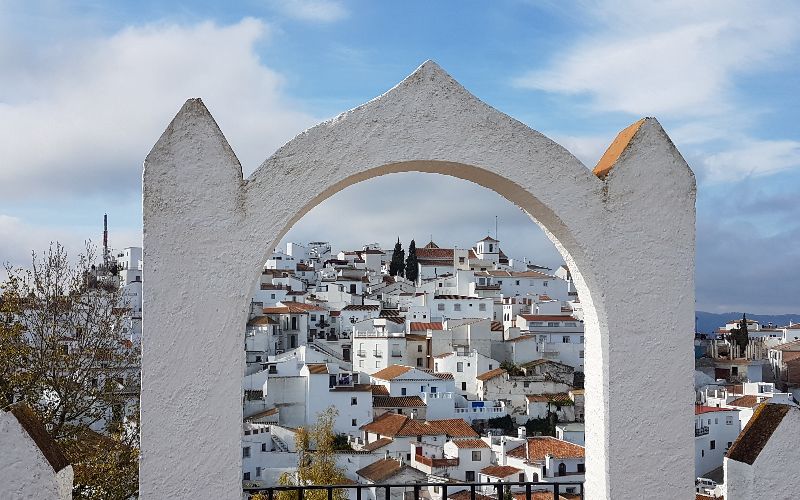 Starting in Velez-Malaga, find the A7205 and head north towards Trapiche.

There’s a somewhat obscured, left turn just before you reach Trapiche. It’s easy to miss – we did this several times. But don’t worry if you do. There’s a CEPSA petrol station just after the village, which you can cycle through and take a left on the busier A356, before taking the first right onto the MA3113 (Triana and Benamargosa).

Once you’re on this road, start making your way through the valley. As you pedal away from the town, the countryside starts to green as avocado, papaya and cherimoya groves spring up, punctuated by the occasional farm or finca. Gradually ascending, you’ll cycle through the pretty villages of Triana and Benamargosa.

At Benamargosa, the road splits into the MA3107 and MA3108 (crossing the river). Avoid the river and take the right fork. At this junction, you may also want to fuel up before the big climb at one of the shaded cafes and restaurants.

Once through Benamargosa, you’ll pass the smaller village of Salto de Negro and enjoy a whooshing descent into the valley. But keep your eyes peeled. Shortly afterwards, you’ll need to turn left onto the MA3105 (Comares and Ruta de la Pasa).

I’m not gonna lie: the first two kilometres of this road are tough. Climbing 198m at an average of 10%, your heart gets a good workout. And, no thanks to the bends in the road, it’s hard to tell where the gradient will let-up. But rest assured, you’ll reach a well-earned plateau shortly after the 3km marker. And here you’re rewarded with incredible views across the valley: the ideal opportunity to catch your breath under the pretence of taking photos. 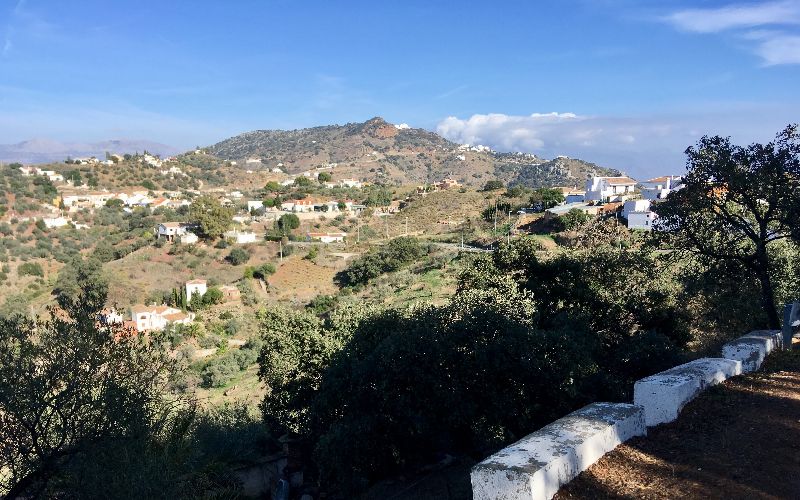 At this point, you get a better look at the village of Comares. Still looming (and dare I say mocking?) on the horizon, it looks less of a white smear and more like a quaint walled village, perched on limestone outcrops.

Continuing on, the road climbs steadily and, as you come up out of the valley, you’ll be able to see alpine vistas for miles around. You can make out Antequera and the ‘Indian’s Head’ to your right, and soon enough Maroma pokes its head over the horizon to the rear.

Another opportunity to stop, catch your breath and drink in the view. 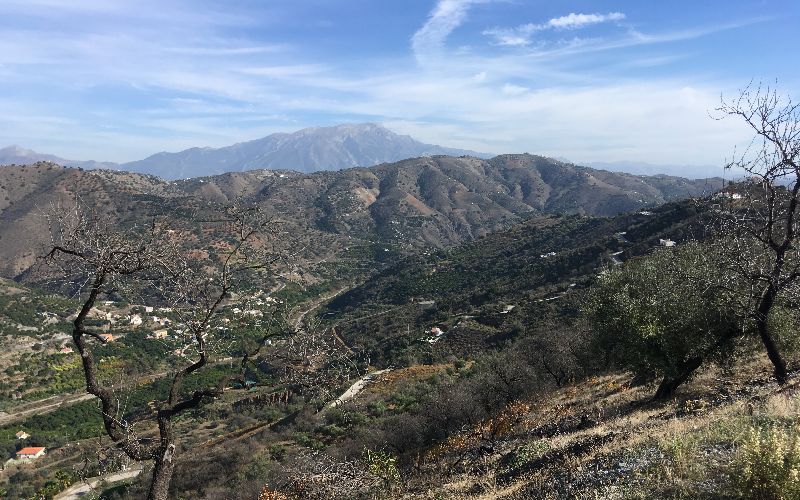 The road climbs, circling the peak, with Comares tantalisingly out of reach. But soon you get an ‘up close and personal’ view on a small plateau with large limestone boulders cluttering the ascent.

Reaching the 1km marker, you wonder how on earth you’ll reach the village in such a short distance.

You reach 0km at the end of the MA3105 – a kilometre or so from the village. Here, the road turns into the MA311, which bypasses the village. There’s a water fountain (fuente) along here within spitting distance* in the likely event that you need to refill your water bottle.

*Probably not an apt description at this point.

Whether before, or after refilling, it’s well worth pedalling up through the fortress walls to Comares and its ‘Balcon de Axarquia’. Here you can feast on incredible views and food from the restaurants. 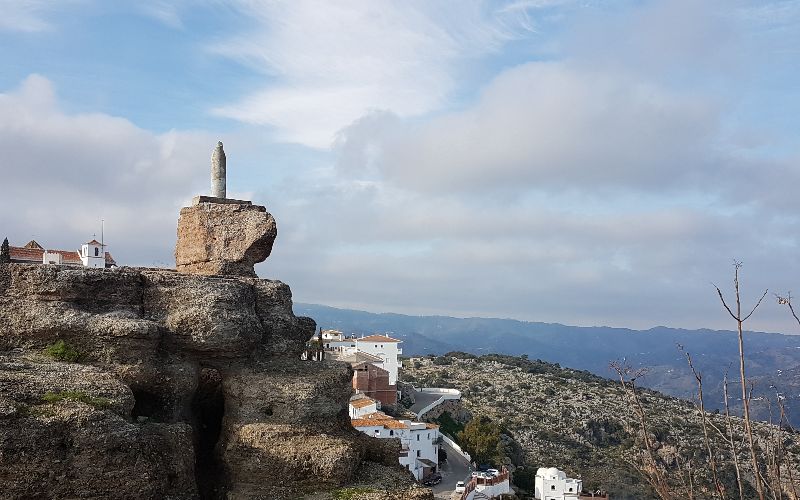 The Moorish village of Comares is well served for eateries, hostelries and banks (with one cashpoint). Dating back to the 300BC, it housed one of three principle forts in the Axarquia. Ceramic plaques depicting its rich history are scattered about the village.

Views from the castle are reportedly spectacular, however, the village from the Balcon is largely pedestrianised and not so accessible by road bike. You’ll struggle on the slopes in clippie shoes, so may have to shuffle around in socks, or pack a pair of flip-flops and wheel the bike along?

Eat in Comares, you’ll find the renowned  restaurant, Los Ventorros, (+34 952 95 70 57) as well as several other eateries. Lunch begins at 13.30hrs until around 16.30hrs and supper begins at 20.00hrs.
Nearby in the small unassuming hamlet farther along the MA311 – Los Ventorros – is Blue Goat HQ – run by bubbly artisan beermeister Liz Luyben, known across the Axarquia (and Europe) for her ‘Cervezas La Cabra Azul’. You can taste her beer in most restaurants and bars in and around Comares.

I’m not a beer drinker, but am reliably informed that it’s delicious. And it’s made using local water, mangoes, almond blossom and their own hops to boot.

You could make this the end of the ride and have a cheeky beer or two before descending (carefully!) back to Velez-Malaga for a siesta.

Or you can continue: your call. 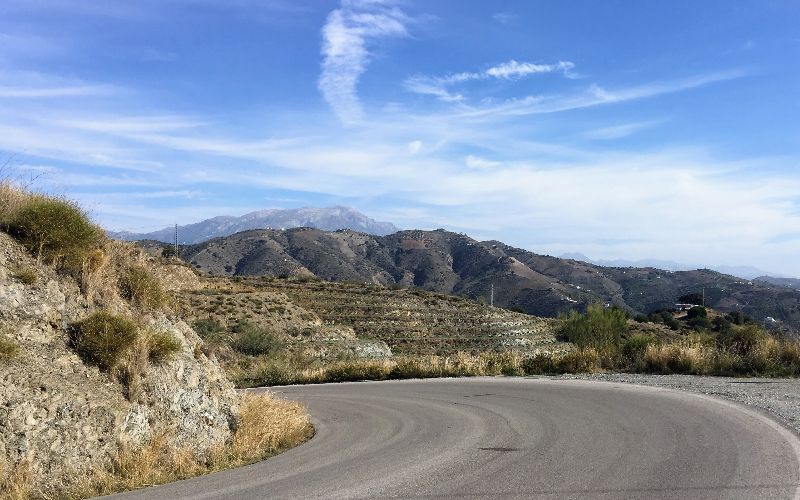 With the tough climb out of the way, the ascent from Ventorros is plain sailing with approximately 6km at a respectable 5.2% average gradient. The road rises, hugging the hillside, providing spectacular views of valleys dotted with fincas and farmhouses. As you start to climb, don’t forget to turn back and take a final peak at Comares framed by the Almijaras.

As soon as you reach the head of the valley, you’re rewarded with far-reaching views to Velez-Malaga and the Axarquia. The smooth, quiet road feels like it’s on top of the world. And as you swoosh down to a ridge, you’ll add panoramic views of the Montes de Malaga to the mix. Heaven.

A fork shortly appears in the road with the MA166 (Malaga) forking right. Stick to the left unless you’re thinking of  ‘Gran Fondo’- ing your ride.

Now you can enjoy an exhilarating descent into the valley along what seems like a never-ending ribbon of tarmac. Just be sure not to miss the MA3110 (signposted Totalan) after approximately 5km. This is to your left – just before entering Olias.**

While descending to Totalan, the road appears to fold back on itself before becoming long sweeping hairpins down the hill. It narrows and there are several blind bends, so keep your wits about you and go easy on the corners.

After you cross the river, the road straightens out and gently undulates, clinging to the hillside. Soon you reach a T-junction on the outskirts of Totalan. You can either go left into the village for a mooch, or go right on the MA3202, which descends into the valley towards the dry riverbed.

After 8km, you’ll reach the bustling authentic town of Rincon De La Victoria. And from here, you’ll get on the N340 coastal road east for the next 20km.

After a short, uninspiring stint through Rincon De La Victoria (keep your eyes peeled for suspended traffic lights), the road starts to run along the coastline.

Passing golden beaches along the glittering Mediterranean, you’ll spy plenty of enticing chiringuitos (beach bar/restaurants) where you can stop to refuel. The small, village of Benjarafe has some particularly lovely options.

Once past Benajarafe, there’s a short spell pedalling through Almayate’s agricultural district, neatly lined with fields of vegetables alongside avocado and mango groves. Oh, and a sign for the Playa Nudista (nudist beach).

The looming outline of a bull on a hill heralds the start of Torre del Mar and, just as you reach the town, you’ll start turning inland. Here, the ride back to Velez-Malaga is along the (mostly) palm-lined N340a / A356, passing to the right of the Ingenio shopping centre.

**Carry on through Olias, and you’ll descend to the outskirts of Malaga. A less extreme way to ‘Gran Fondo’ your ride.

Where to Stay: Check out our other routes here and if you feel like making Velez-Malaga your base for a cycling holiday, then here is our pick of hotels and self-catering rentals.